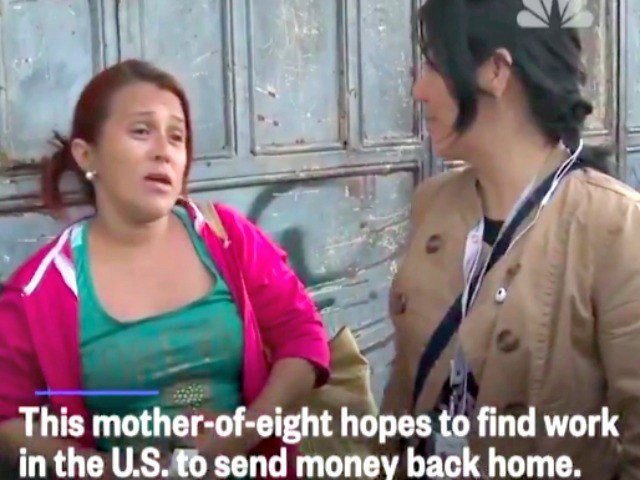 One of the more than 4,000 migrants traveling in a caravan from Honduras through Mexico and eventually to the U.S.-Mexico border admits that she is seeking a job and a community more safe from drugs, neither of which would make her eligible for asylum.

In an interview with NBC News, a migrant identified as Karen Aviles from Honduras traveling with the caravan said she was looking to go to the U.S. to get a job and to provide a safer area for her daughter, whom she said was getting involved in drugs.

NBC News notes, “Among [the caravan] is Karen Aviles. She hopes to reach the U.S. and find work to send money back home.”[Emphasis added]

“I came because my daughter was getting lost to drugs, to rescue her. She was out on the street,” Aviles says. “I left my six children there. I’ve brought two … the oldest ones. The little ones can wait.”

“I hope that perhaps other countries can help us because in Honduras we haven’t found it,”Aviles continues. “I am a single mother, things are not good. Also, to help the children, the family. It’s tough, it’s tough … for the family.”

Several thousand Honduran migrants moved this week through Guatemala, many heading to shelters in Guatemala City for food and rest before they continue on their journeys.

Among them is Karen Aviles. She hopes to reach the U.S. and find work to send money back home. pic.twitter.com/UjC0mK7hx5

Though members of the migrant caravan have been portrayed by the establishment media as “asylum-seekers,” fleeing drug-fueled communities and looking for work are not grounds for asylum in the U.S.

As Breitbart News‘s Neil Munro reported, migrants with the caravan profiled by the New York Times and the Associated Press have all noted that their main goal once arriving in the U.S. is looking for a job — which is not an eligible claim for asylum.

This week, Breitbart Texas reported that the migrant caravan has stormed through Mexico, tearing down a border barrier in the process as they cross from Guatemala to Mexico.

Currently, the U.S. admits more than 1.5 million legal and illegal immigrants every year, with more than 70 percent coming to the country through the process known as “chain migration,” whereby newly naturalized citizens are allowed to bring an unlimited number of foreign relatives to the country. The mass illegal and legal importation of mostly low-skilled foreign workers is a boon to big business and Wall Street, but results in decades of poor job growth, stagnant wages, and increased public costs for working and middle-class Americans.