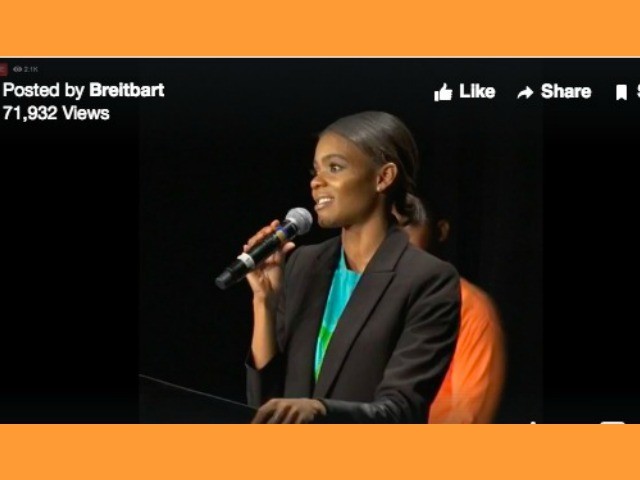 Candace Owens announced her new project BLEXIT, ‘the black exit from the Democrat Party,’ vowing to take her mission of exodus to the very cities controlled by democratic politicians.

The room was speckled with red “Make America Great Again” hats and colorful “BLEXIT” t-shirts, which Owens mentioned were designed by Kanye West. The rapper tweeted his support for Owens in April, shortly before vocally announcing his own support for President Donald Trump.

Today will represent a watershed moment in American history.

At 4:00pm ET I will deliver a Black State of the Union address.

This will be a message for all Americans regarding the state of our culture & those who wish to see us divided.

“Eighteen million black babies have been aborted since 1973,” Candace continued, “We have aided and abetted in [the left’s] plan to stop new black births — the most unsafe space for a black child in America is in their mother’s womb.”

The room was somber at first, and some sniffling could be heard in the audience.

“Government plantations were sold to us as empowerment,” stated Owens boldly, “Black Americans are poorer today than before [welfare’s] proliferation.”

The energy in the room quickly picked up as Owens spoke about the future.

The media will never show you a mass gathering of black folks shouting “BUILD THAT WALL.”

Raise your hand if you support the #BLEXIT movement. 🙋🏽‍♂️ pic.twitter.com/8Z7IHX8EuW

“The BLEXIT movement will spend 2019 holding rallies in every major city in America the Democrats have destroyed,” affirmed Owens.

The crowd cheered as Owens began naming the cities she plans to visit.

“We are at long last ready to snatch a piece of this America dream,” said Owens, “We can fully recognize that this in fact our country, that while Hillary Clinton viewed us as ‘super predators,’ CNN views us as ‘token negros who don’t read,’ Donald Trump views us as Americans.”

The audience of black conservatives then erupted in patriotic chants of “USA!”