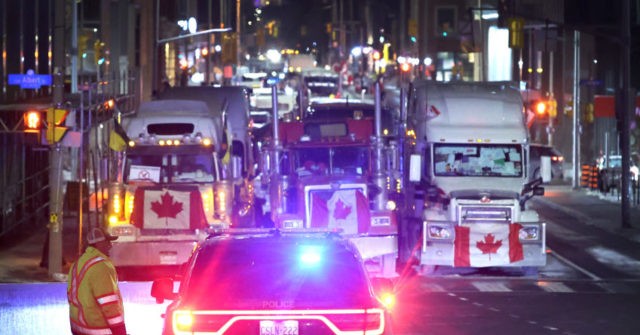 Canadian police have taken a hardline approach in an effort to break up the Freedom Convoy in Ottawa, with at least 100 arrested and mounted police trampling protestors on Friday.

Mounted police and officers clad in riot gear, some carrying rifles, moved in on the Freedom Convoy on Friday, pushing into crowds of people including children as protestors linked arms and sang the national anthem in an effort to block their advances.

Scuffles between police and protestors were reported, with Freedom Convoy members creating makeshift snow barriers to help them defend against the police.

Four senior protest leaders are among roughly 100 people who have been arrested — largely on ‘mischief’ charges — and two dozen vehicles blocking key roads having been towed out of the estimated 350 vehicles belonging to the protestors.

Police have refused to release numbers of remaining protestors or vehicles, AP reports.

Interim Ottawa Police Chief Steve Bell claimed that no protestors were injured, despite footage circulating on social media of police horses trampling protestors at the convoy.

Ottawa Police attempted to justify this extreme behaviour by suggesting “a bicycle was thrown at the feet of one of the horses in an attempt to injure it”, but their account of events has been disputed.

Another camera angle of the incident shows the elderly woman trampled by police horse in Ottawa.pic.twitter.com/xrK4s5JHoX

For the first time during the three-week protest against coronavirus restrictions, police appeared to outnumber the protestors, using this advantage to close off central Ottawa with 100 checkpoints and starve the convoy of reinforcements.

The protestors have also claimed that the police are trying to make an example of them, alleging some attendees of the blockade are being prevented from leaving the area by law enforcement despite police playing messages encouraging them to vacate the area — which, if true, would essentially guarantee their arrest.

Some of the truckers have begun to evacuate the area, however, with a number of vehicles leaving the protest in an effort to avoid arrest, but the majority of the truckers — many of whom are veterans — appear to be continuing their policy of remaining there “for as long as it takes…until Canada is a free nation again”.

Trucker Kevin Homaund of Montreal told AP that “Freedom was never free. So what if they put the handcuffs on us and they put us in jail?”

The police also seem intent on not compromising, with Chief Bell insisting that officers will “continue to push forward to take control of our streets” and that they will “work day and night until this is completed”.

Ottawa Police contend that a protester had thrown a bicycle at the horses but protestors who I spoke with deny the allegations pic.twitter.com/RdqU2Jk7aI

Those operating the tow trucks removing convoy vehicles covered the logos of the companies they worked for and wore neon-green ski masks in an effort to obscure their identities, presumably to avoid potential boycotts from supporters of the truckers.

Campers, trucks, and cars were amongst the vehicles being towed by the police, with officers breaching the door of at least one camper before towing it away.

The Ottowa police declared on Thursday that they would be moving to physically break up the last stronghold of the Canadian freedom convoy by Parliament Hill, with reinforcements from Quebec supplementing local police numbers.

Interim Ottowa Police Chief Steve Bell warned protestors on Wednesday that police were preparing to use extreme measures, saying on Wednesday: “Some of the techniques we are lawfully able and prepared to use are not what we are used to seeing in Ottawa, but we are prepared to use them… to restore order”.

Canadian prime minister Justin Trudeau, of the Liberal Party, enacted emergency legislation on Monday in order to grant the police new powers to break up the rally.

Trudeau has branded the protest as “illegal blockades and occupations” as well as a “threat” to Canadian “democracy” in an effort to justify the emergency measures.

Police in Ottawa brutalize a protester, kneeing him until he hits the ground. pic.twitter.com/2cjia3nBEW