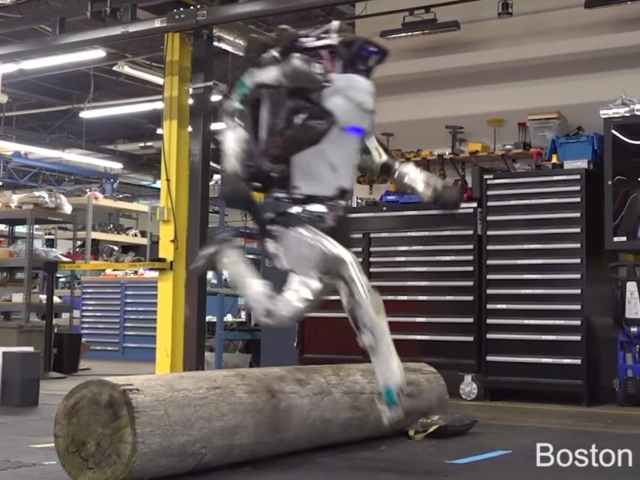 Robotics company Boston Dynamics released a video of its humanoid Atlas robot leaping through a parkour obstacle course this week.

In the video, Atlas can be seen running over a log and jumping up a series of platforms.

“Atlas does parkour. The control software uses the whole body including legs, arms, and torso, to marshal the energy and strength for jumping over the log and leaping up the steps without breaking its pace,” Boston Dynamics explained in the description of the video. “Atlas uses computer vision to locate itself with respect to visible markers on the approach to hit the terrain accurately.”

Boston Dynamics has previously demonstrated Atlas’ ability to pick up objects, open doors, jog, get off of the ground after a fall, withstand attacks from humans, and perform backflips.

“Atlas is the latest in a line of advanced humanoid robots we are developing. Atlas’ control system coordinates motions of the arms, torso and legs to achieve whole-body mobile manipulation, greatly expanding its reach and workspace,” declared Boston Dynamics on its website’s profile of Atlas. “Atlas’ ability to balance while performing tasks allows it to work in a large volume while occupying only a small footprint.”

“The Atlas hardware takes advantage of 3D printing to save weight and space, resulting in a remarkable compact robot with high strength-to-weight ratio and a dramatically large workspace,” the company continued. “Stereo vision, range sensing and other sensors give Atlas the ability to manipulate objects in its environment and to travel on rough terrain. Atlas keeps its balance when jostled or pushed and can get up if it tips over.”

Boston Dynamics is also working on at least eight other robots, including Handle (which can use both legs and wheels), Spot (a four-legged dog-like robot which can traverse difficult terrain), and Sand Flea (a small RC car-style robot which can jump onto the roofs of buildings).

On Thursday, Technology Review reported that DARPA, the government agency that has provided funding to Boston Dynamics, will run a competition to teach artificial intelligence “common sense.”

“The absence of common sense prevents an intelligent system from understanding its world, communicating naturally with people, behaving reasonably in unforeseen situations, and learning from new experiences,” explained DARPA program manager Dave Gunning. “This absence is perhaps the most significant barrier between the narrowly focused AI applications we have today and the more general AI applications we would like to create in the future.”