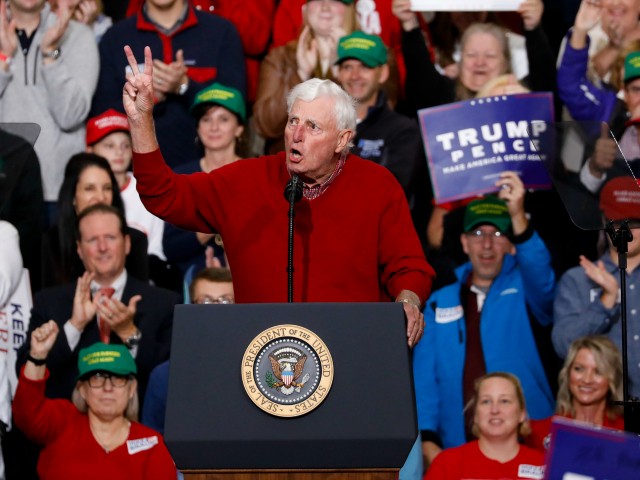 Knight spoke of former President Harry Truman before a member of the crowd yelled out, prompting Knight to respond that President Trump “has already given them hell.”

“Join with me in saying something,” Knight prodded the crowd. “Say, ‘Go get ’em, Donald.’”

Bobby Knight led the crowd in a “Go get ’em, Donald” chant at a rally at Southport High School, adding that Trump has been “a great defender of the United States of America.” https://t.co/O21Pq4MZL0 pic.twitter.com/RtHNfp98WO

The basketball legend told the crowd it takes great defense to win in basketball. “And that’s what he’s been; he’s been a great defender of the United States of America,” Knight said of Trump.

Trump lauded Knight at the rally, telling the story of when Knight called him and encouraging him to run for president before he had made the decision. As Trump made his decision to run in the 2016 election, he was told of the importance of Knight’s endorsement in Indiana. He recalled what he deemed a gift from God, lifting up one of several stacks of paper on his desk and coming right across the index card with Knight’s phone number. He said he called Knight, who said he had been waiting for Trump’s call.

President Trump recounted Coach Knight’s litany of basketball achievements, including his induction into the Hall of Fame in 1991, his record as the last coach to have an undefeated season for the Indiana Hoosiers, coaching the team to several NCAA titles, and coaching the USA Men’s Basketball Team to Olympic gold.

Trump urged rally attendees and watchers to get out and vote for Republican Senate candidate Mike Braun and a Republican Congress. He later tweeted, “Indiana Rally, and Coach Bobby Knight, were incredible last night. Packed House in Honor of Mike Braun for Senate. Mike will be a GREAT Senator. Don’t forget to VOTE!”