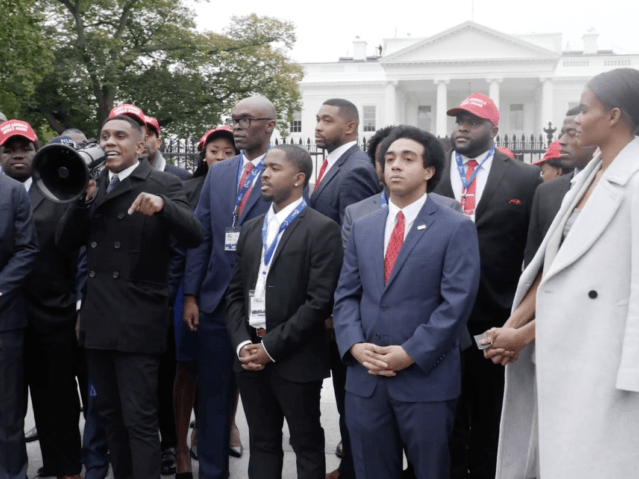 Hundreds of young black conservatives from across the country united in front of the White House last week to denounce the Democratic Party and call for members of the black community to join them.

The rally was led by Turning Point USA’s Director of Communications Candace Owens, and Director of Urban Engagement Brandon Tatum, following their meeting with President Donald Trump at the White House.

“Black people do not have to be Democrats,” said Owens into a megaphone, “In fact, the argument needs to be made that black people should not be democrats. They destroyed our communities, they’ve taken our fathers out of the home, they’ve made broken promises. It is time for a change and Donald Trump is delivering that.”

The crowd cheered, as a large group of onlookers stopped to listen.

Watch: “Black people do not have to be Democrats.”

“Most of the people who are part of this [event] have walked away from the Democrat Party,” said one black conservative, who mentioned that unlike most of the other attendees present, had been voting Republican since President Ronald Reagan, “I have to tell you, I have never been around this many Americans of African descent who have the same political ideology.”

The black conservatives continued to pass the megaphone around, each one delivering their own personal story and sentiments to the large group of spectators who had stopped to listen.

“I say that we have the best police, the best president, and the best country in the whole world,” Lutchman continued, “And I’m here, asking the rest of the black community to join us, and to see through the lies and the manipulation, and the deception of the Democratic Party that has been going on for far too long.” (Watch above).

“Lyndon B Johnson, what did he say?” Terrence Williams asked the crowd, who then answered by finishing his next sentence: “He said ‘we’ll have these [explicit] voting democratic for the next 200 years.’”

“Well the devil is a lie, because I’m not voting democrat!” declared Williams.

Another conservative told the crowd that he believes white privilege is something that liberals enjoy using to keep black conservatives down.

“I used to believe that there was no such thing as white supremacy, and — white privilege, but I stand corrected, because if you’re a white liberal, then you get to look a black man in the face and tell him that he is a disgrace to his race,” he affirmed.