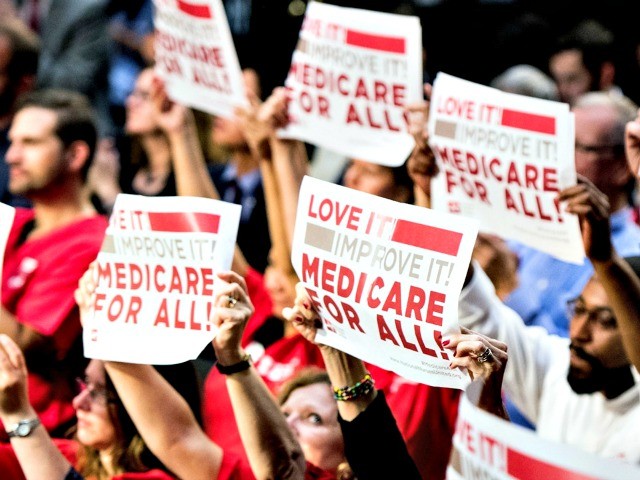 Senator Bill Cassidy (R-LA) told Breitbart News in an exclusive interview on Tuesday that Democrats’ single-payer Medicare for All plan would mean that no one receives quality health care.

Sen. Cassidy remains one of the foremost experts on health care in the U.S. Senate, as both a doctor and a lawmaker who led the charge last year to try to pass the Graham-Cassidy Obamacare block-grant repeal approach.

Sen. Cassidy told Breitbart News that Medicare will soon become bankrupt, and adding half of the country to the government health care will not improve anyone’s health care.

Sen. Cassidy also explained, “If you double the income tax, double the individual tax, you still would not have enough money to pay for what Bernie Sanders is proposing. Now I say Bernie, but a lot of folks in the Democratic Party are saying this.”

Mercatus Center scholar Charles Blahous released a study in August which found that a government-run Medicare for All scheme will cost $38 trillion over the next ten years, contrary to Sanders’ claim that the plan would save the country money.

The Associated Press (AP) even noted that the socialized medicine proposal would require “historic” tax increases to pay for the single-payer healthcare proposal.

“Before too many Americans become invested in the rhetorical vision of Medicare for All, there needs to be a serious national discussion about whether shouldering its vast cost is even remotely within the realm of practical possibility,” Blahaus contended.

Cassidy added that Democrats “do have ideas, they’re just really bad ones.”

After Senate Republicans confirmed Judge Brett Kavanaugh to the Supreme Court and ahead of the 2018 midterms, Democrats pivoted towards attacking the GOP over their alleged plan to end Obamacare protections for patients with pre-existing conditions.

Griffon has a child with special needs and said that thanks to Obamacare, he has to pay “$40,000 after-tax dollars and a $13,500 deductible”

The Lousiana senator also noted that the Washington Post even fact-checked and verified Griffon’s claim that he has to pay “on net $53,000 a year for health insurance” under Obamacare.

“That is the ultimate loss of coverage for [those with] pre-existing” conditions, Cassidy said. “You can’t afford it.”

Sen. Cassidy said that Democrats will continue to defend the “absence of affordability.”

In contrast, Cassidy said, “We’re about lowering costs, while protecting pre-existing conditions so that middle-class families actually have health insurance.”