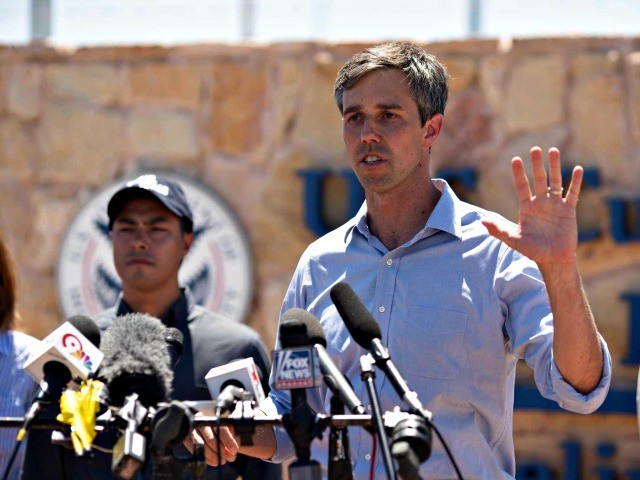 During a town hall event on Wednesday night, Rep. Beto O’Rourke (D-TX) — running against Sen. Ted Cruz (R-TX) for the Senate seat — told a black American who questioned his support of illegal immigration that illegal aliens from Central America and Mexico are today’s cotton pickers.

O’Rourke’s remarks were made after a black American asked the congressman if he supported illegal aliens being given U.S. citizenship despite breaking the country’s immigration laws. O’Rourke responded by saying that it is illegal aliens who are working at cotton gins today.

The exchange went as follows:

BLACK AMERICAN: My question is, do you support granting citizenship and American-paid benefits to illegal aliens who violated our country to come here, who fly their foreign flags here, who have citizenship in their countries and whose families did absolutely not build this country, while black people are subject to things that you explained before? You can answer yes or no, please. [Emphasis added]

BETO O’ROURKE: Many, many people built this country, first of all. And we are a country of many people … and I’m paraphrasing Congressman Lewis at this point, but he said something to the effect that each of us came to this country in a different ship. Some of us came here against our will, some of us immigrated here lawfully … some of us are showing up right now as we speak. They’re fleeing the deadliest countries in the planet today. The northern triangle countries of Central America … imagine how bad things have to be for you to scoop up that six-month-old daughter of yours and to walk 2,000 miles … to refuge in a country that is comprised of people from the world over. And yes, there are some people who did not follow our laws when they came here to be with their families or to work jobs and, in some cases, no one was willing to work in their communities. [Emphasis added]

I mentioned going to the high school in Roscoe, I also went to the cotton gin in Roscoe. And at that cotton gin, there are 24 jobs and the manager of that gin says it does not matter the wages that I pay or the number of hours that we set … no one born in Roscoe … or Texas or this country who is willing to work. But there are immigrants who are coming from Central America or Mexico or other parts of the world to Roscoe to work these jobs and to help build our economy. [Emphasis added]

O’Rourke recently said in an interview on CBS The Late Show, that he supported an amnesty for more than three million illegal aliens who were eligible and enrolled for President Obama’s DACA program.

“We can free DREAMers from the fear of deportation by making them U.S. citizens today, so they can contribute to their maximum capacity, to their full potential,” O’Rourke said.

Mass low-skilled illegal and legal immigration has come at the expense of America’s black working and middle-class communities and workers.

Data reported by Breitbart News reveals how studies by economists and researchers find that it is, specifically, underprivileged black American men who suffer the most from the importation of more than 1.5 million low-skilled immigrants every year to the U.S.

In the mid-1990s, Civil Rights icon and Texas Democratic Congresswoman Barbara Jordan issued the findings of her immigration commission, where she revealed that mass immigration to the U.S. hurt poor, working-class and lower-tier middle-class Americans the most, as it unfairly put them in competition with a never-ending flow of cheaper, foreign workers.

Most impacted, the Jordan Commission discovered, were black Americans.

Portraying foreign nationals as the only willing blue-collar workers in the U.S. is a talking point often used by the open borders lobby, the Business Roundtable, and both political establishments.

O’Rourke’s suggestion that Americans are unwilling to do blue-collar jobs is not backed up by data collected and analyzed by the Center for Immigration Studies.

Researcher Steven Camarota has found that of the more than 460 American occupations he analyzed, only four were dominated by foreign-born workers. Those four occupations accounted for less than one percent of the total U.S. workforce.

For blue-collar American workers, mass immigration has not only kept wages down but in many cases, decreased wages, as Breitbart News reported. Meanwhile, the U.S. continues importing more foreign nationals against whom working-class Americans are forced to compete. In 2016, the U.S. brought in about 1.8 million mostly low-skilled immigrants.

Black Americans are often the most supportive of reducing immigration levels. A Harvard/Harris Poll conducted this year found that 48 percent of black Americans said they would like to see between only one and 250,000 legal immigrants brought to the U.S. a year, a near immigration moratorium when compared to current levels.

A CBS News/YouGov Poll conducted a few months ago revealed that a plurality of black Americans in swing districts who say immigration has changed their neighborhoods concede that immigration is making life in America “worse” for them.