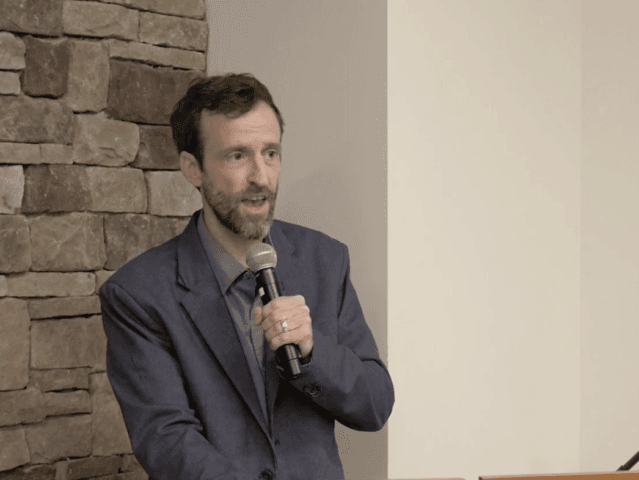 Scott Horton, author of a new book Fool’s Errand: Time to End the War in Afghanistan, argued that the ongoing war in Afghanistan is a “betrayal of American soldiers and Marines” at an event Tuesday in Washington, DC.

“The hawks always hide behind the enlisted men with all of their arguments for any intervention and [say] the only way to support the troops is to support their policy,” he said. “That’s frankly just wrong, especially in the United States of America where it’s supposed to be a limited constitutional republic.”

Horton spoke at an event hosted by the Committee for Responsible Foreign Policy, a non-partisan organization that advocates for a restrained foreign policy.

He said when Americans join the military, they trust their leaders will only send them on missions that endanger their lives when it is absolutely necessary and to fight for the country’s freedom.

“That’s what they are told they’re volunteering for – not to implement the grand strategy of some egghead at a think-tank who’s never been in a fight in his life, and who has a great plan for offensive war against people who’ve never attacked us,” he said.

“And so, it’s just wrong that we’re not supposed to discuss this,” he said. “The foreign policy is a betrayal of American soldiers and Marines.”

Horton said the “hard truth” was that America started the Global War on Terrorism when it supported the Afghan mujahideen during the ’70s and ’80s against the Russians. “America picked this fight,” he said, “to give the Soviets their own Vietnam.”

He then walked through the history of U.S. intervention in the First Gulf War, Afghanistan, and the Second Gulf War, which he said fueled terrorists like Osama bin Laden who wanted to make the United States a target.

“Al Qaeda’s strategy was to provoke an overreaction,” Horton said.

Now, he said, years later and over $20 trillion in debt, the executive branch has turned into a “totalitarian bureaucracy.”

“In comparison to the other branches of government, the executive branch, presidency, and the departments are virtually lawless,” he said.

He also said they were in “open revolt” against the presidency for “good or ill,” citing President Trump’s desire to get out of Afghanistan and Syria, but being told by his advisers that he had to stay.

He faulted former President Barack Obama for enabling the Saudi government in the war in Yemen. He said Obama supported Saudi Arabia in the war to assure them that, after the nuclear deal with their rival Iran, they would still be a close U.S. partner.

“Americans have been helping pick targets, refueling, helping with intelligence, [the] U.S. Navy helps enforce the blockade attempting to starve the people in Yemen,” he said. “That’s the war we’re waging for the most spurious of reasons.”

Horton is also managing director of the Libertarian Institute, editorial director of Antiwar.com, and host of Antiwar Radio on Pacifica, 90.7 FM KPFK in Los Angeles, and podcasts the Scott Horton Show.