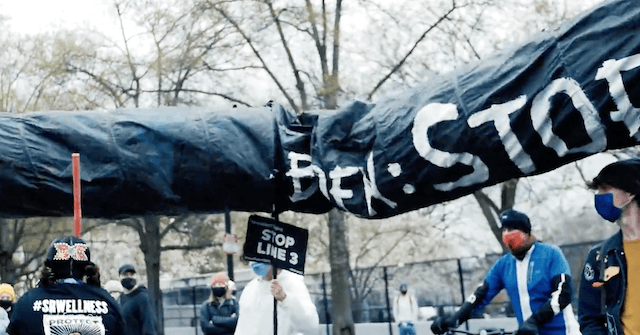 Anti-pipeline activists “slayed” a pipeline “snake” outside the White House on Thursday as part of a protest against pipelines in the U.S., calling on the Biden administration to take further action, particularly against the Dakota Access Pipeline.

On Thursday, protesters, some of whom wielded sticks, beat a pipeline “snake” in the nation’s capital. The snake, one activist said, represented “pipelines that are crossing indigenous lands [and] crossing stolen land.”

“As you know this black snack symbolizes the Dakota Access Pipeline, and we just now slayed it, and now we’re giving it back to the White House because we don’t want it on our land,” another activist said before announcing a “victory dance.” Several activists then gathered around, participating in the “victory dance” around the snake as others beat dreams in the background.

“We came here to bring back the black snake, because if the Biden administration doesn’t want this at their home, then they shouldn’t bring it to ours,” one protester said as another called on the president to shut down pipelines “now.”

Protesters also staged a “die-in” during the protest, which they said represented “all the people whose lives have been cut short due to COVID-19 and also fossil fuels.”