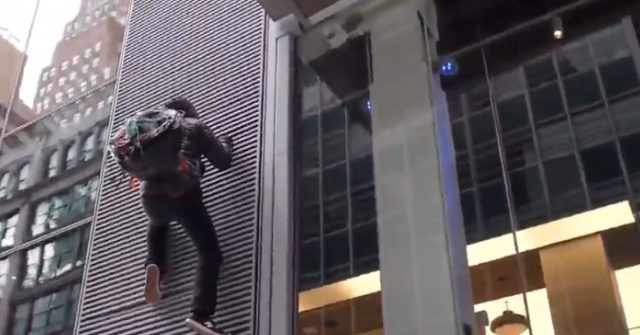 An anti-capitalist agitator fell, landing on is back when he attempted to scale the Chase Bank building in Manhattan Friday.

Dressed in all black and wearing a large backpack, the man was attempting to climb the exterior while one of his comrades spray painted from the ground:

Protester Just Fell off the building while climbing Chase Bank in Manhattan to #StopLine3 pic.twitter.com/Un5kgxV8Du

“Get down,” someone shouted from below as the agitator continued to go higher.

As he attempted to make his way onto an overhang, the man lost his grip and plunged about 15 feet, landing flat on his back.

As he groaned, the paint he was likely going to use to deface the building streamed across the sidewalk.

“Someone call 911!” a fellow agitator yelled as the man lay motionless on the ground.

“Stand back, EMS is coming,” a security guard announced.

The anguished agitator told his comrade he fell on his hip before emergency personnel arrived.

Protesters were in the streets of New York City, Washington, DC, and other American cities to shut down Enbridge’s Line 3 in Minnesota.

In D.C., protesters paraded a giant black snake, apparently a representation of the pipeline, before “slaying” it in front of the White House:

A woman beat the plastic tube with a stick while others waved metal sheets and cheered. Another woman shouted before stabbing a rod into its head. It’s not clear if they planned to recycle their “kill.”

Meanwhile, women used bike locks to secure themselves by the back to tripod structures built outside the White House:

Students from Northwestern University in Illinois occupied a bank lobby and sang and dour song:

A @NAISA__ chapter from Northwestern then led a song for Missing and Murdered Indigenous Women. #StopLine3 #MMIW pic.twitter.com/t0VwskJU5K

Protesters want the Joe Biden administration to prevent the Dakota Access Pipeline and Enbridge’s Line 3 from being built.