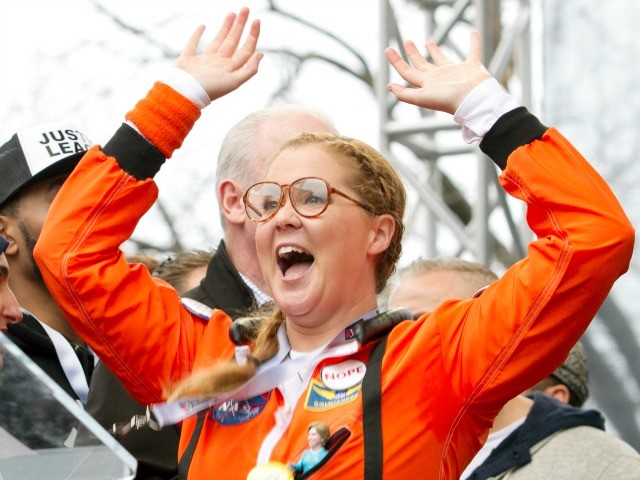 Actress Amy Schumer was voluntarily arrested along with a horde of left-wing protesters outside the Supreme Court on Thursday, as the Senate prepared to move forward confirming President Donald Trump’s Supreme Court nominee Judge Brett Kavanaugh.

Video published by the Daily Caller’s Benny Johnson appears to show Amy Schumer being asked if she wants to be arrested.

“Here is @amyschumer telling cops she *wants* to be arrested,” Johnson captions his tweet, which includes video of Schumer talking to a police officer. “Cop asks ‘Do you want to be arrested?’ Schumer: ‘Yes.’”

Schumer was among the reported dozens of activists arrested Thursday, as was actress Emily Ratajkowski also said on Instagram that she was arrested at the protest.
“Today I was arrested protesting the Supreme Court nomination of Brett Kavanaugh, a man who has been accused by multiple women of sexual assault,” Ratajkowski, who took part in the protest outside of the Hart Senate Office Building on Capitol Hill, wrote on Instagram. “Men who hurt women can no longer be placed in positions of power. Kavanaugh’s confirmation as a Justice of the Supreme Court of the United States is a message to women in this country that they do not matter. I demand a government that acknowledges, respects and supports women as much as it does men.”

Before her arrest, Schumer addressed the crowd, telling them “a vote for Kavanaugh is a vote saying women don’t matter.”

.@amyschumer: “A vote for Kavanaugh is a vote saying women don’t matter.” pic.twitter.com/UYKdlMKZ4A