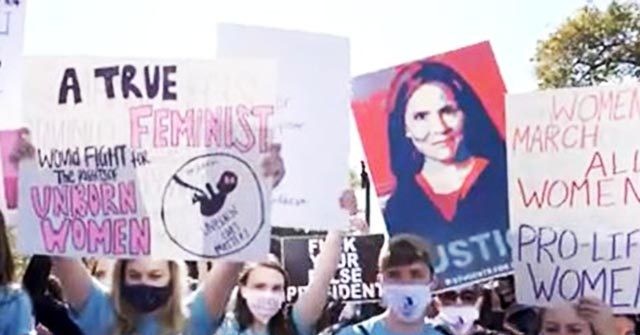 Supporters of Judge Amy Coney Barrett blocked feminist protesters at the Supreme Court on Saturday as the anti-Trump activists gathered in the nation’s capital for the Women’s March.

Supporters of President Trump’s Supreme Court nominee blocked feminists protesters outside the Supreme Court on Saturday, holding signs reading, “Women’s March. All women. Pro-life women,” “I am the pro-life generation,” and “NARAL’s worst nightmare: Women knowing they don’t have to choose between children and career.”

Another Barrett supporter held a sign stating that a “true feminist” would fight for the lives of unborn women, adding “unborn lives matter.”

Meanwhile, anti-Trump and anti-Barrett activists played music in the background, chanting “RBG” and “their body, their choice.” Some of them held signs reading, “fuck your false president,” “Supreme farce,” “Universal abortion access,” and “state of shame.”

Women’s March officially advertised the day of action as a means “to send an unmistakable message about the fierce opposition to Trump and his agenda, including his attempt to fill Ruth Bader Ginsburg’s seat.”