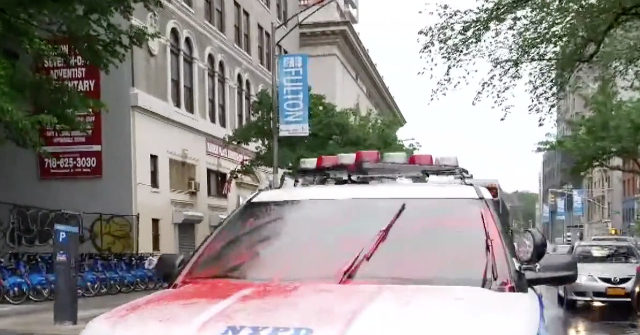 A New York City police officer tried in vain to use his wipers to remove the blood-red paint agitators threw on his windshield on Friday.

Video captured by Breitbart News shows the SUV stopped on a Brooklyn street as photographers approached for a shot.

One masked protester posed in front of the vehicle flashing double middle fingers for the cameras.

“Blood on your hands!” the crowd chanted.

A man stood behind him appearing to pose for a selfie with the vandalized NYPD car.

Others posed for photos, as well.

The New York Post wrote, “A couple walking past a trashed Santa Monica T-Mobile store stop so she can pose in front of the storefront. The man takes the picture and they walk on.”

“White women continue to disappoint,” the bystander who captured it wrote. “These protesters are not a content opportunity for you. This is in Santa Monica.”