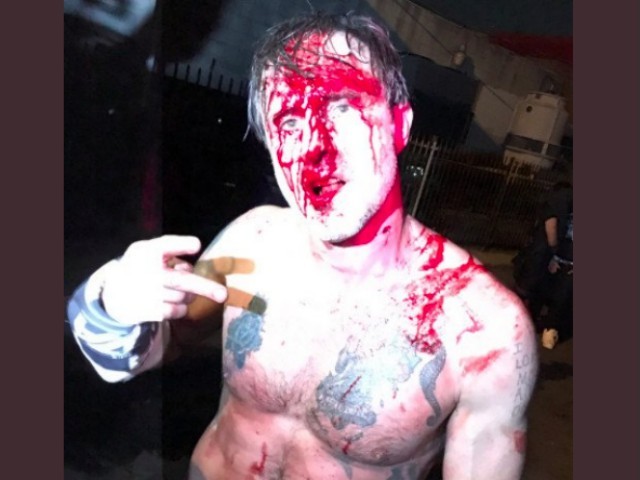 Actor David Arquette was left covered in blood Friday after being pummeled in a “Death Match” at a professional event in Los Angeles.

Photos and videos shared on social media show David Arquette wrestling with Nick Gage. Arquette can be seen getting his jugular cut during the vicious battle.

I think it’s right about here where David Arquette got it in the jugular & he was bleeding a freaking lot. Holy hell. #JJLAC pic.twitter.com/zruTuE5VtP

David Arquette landing a cutter on Nick Gage through light tubes. After having already been smashed with tubes himself. #GCW #JJLAC pic.twitter.com/RYXtHFwMn5

Celebrity news site TMZ reported, “The actor-turned-wrestler was up against Nick FN Gage and it was just brutal. Gage broke a light tube over Arquette’s head. You see David grab his neck as blood pours from the area. Shockingly, the fight continues.”

The Scream star took to social media after the fight, saying, “Thank you to all the fans for your love I’m a stitched up. Miss Elizabeth is crying.”

Thank you to all the fans for your love I’m a stitched up. Miss Elizabeth is crying pic.twitter.com/hOJbPgd1Fl

“Turns out Death Matches aren’t my thing,” he also wrote.

In addition to his acting, Arquette has been a professional wrestler, most notably becoming the World Heavyweight Champion in the now-defunct World Championship Wrestling (WCW).

The 47-year-old has gotten involved in activism in Hollywood as well, joining the #AskMoreOfHim campaign, which is comprised of men in the entertainment industry fighting back against the sexual harassment of women.

Proud to join #AskMoreOfHim at the #Oscars and every day. Because men can and must do more to stop violence against women in Hollywood and beyond. #TimesUp Learn more: https://t.co/Nottyu85NK