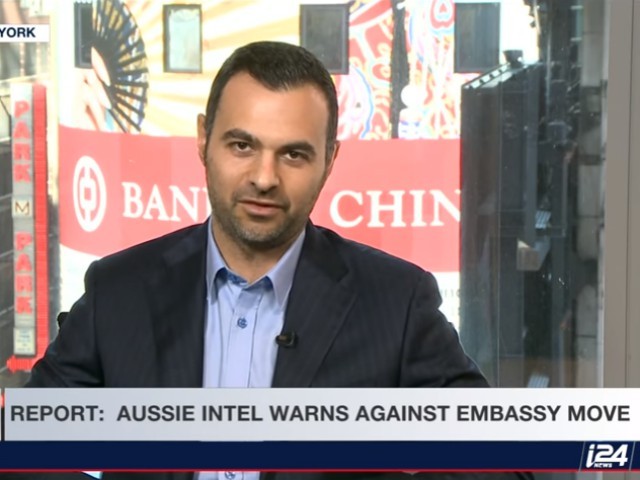 Australia should ignore critics warning against relocating its embassy from Tel Aviv to Jerusalem and instead make the move, argued Breitbart Jerusalem chief Aaron Klein.

Klein made the comments (video above) during a panel discussion on Israel’s i24NEWS.

Amid reports that Australia is considering a change in its policy toward Jerusalem, some naysayers argued that such a move could ignite regional violence or impede peace talks.

This is the same argument that we heard against moving the American embassy to Jerusalem. What violence? We were talking here about the end of the world. The Arab street would revolt. It was largely silent. So first of all, let’s not feed into this paranoia about the Arab street when it comes to moving embassies to Jerusalem.

And then second, the other argument is that this somehow impedes peace efforts. As if again the Palestinians haven’t refused numerous statehood offers with a capital in Jerusalem. But actually it doesn’t impede any effort because easily if the Palestinians accept a state, then America and others can open up an embassy or a consulate in the eastern sections of Jerusalem. And Australia has traditionally stood with American foreign policy and I think that they are doing that now, as well.

Last week, Prime Minister Benjamin Netanyahu’s office confirmed in a statement that Australian Prime Minister Scott Morrison informed the Israeli leader during a phone call that his government is “weighing officially recognizing Jerusalem as the capital of Israel and moving the Australian embassy to Jerusalem.”

Morrison told reporters that “no decision has been made regarding the recognition of the capital or the movement of an embassy,” but he affirmed his “government is open-minded about this.”

Last week, Australia’s Guardian online site obtained a copy of an intelligence bulletin authored by the country’s spy agency and marked “secret” warning that an announcement on relocating the embassy could “provoke protest, unrest and possibly some violence in Gaza and the West Bank.”

Klein reacted: “I love how this Australian top-secret report warning of violence is so top secret that it leaked to the media within a day.”