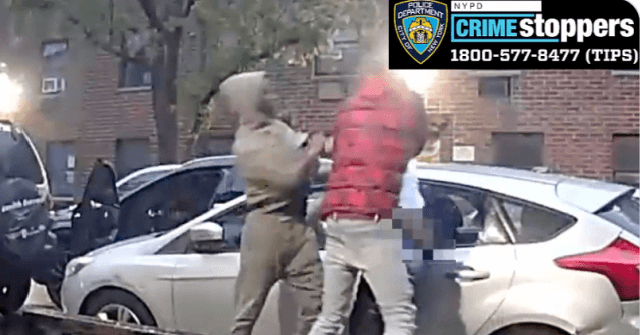 New York City police are searching for two suspects they say punched, stabbed, and slashed a 25-year-old man during a vicious robbery in the Bronx earlier this month.

The New York City Police Department (NYPD) Crime Stoppers said the caught-on-camera robbery, seen below, occurred in the 800 block of East 167th Street in the Bronx just before 8:00 p.m. on May 7.

Police said two suspects accosted the man on East 167th Street while he sat in his BMW, 1010 WINS reported. One of the suspects entered the vehicle through the front passenger’s side door and the other gained entry to the car through the rear driver’s side door, News 12 the Bronx noted. Authorities said the suspect in the passenger’s seat allegedly brandished a firearm while ordering the victim to fork over his possessions, and the 25-year-old attempted to get away from the perpetrators, per the outlet.

Police said a struggle ensued outside the BMW, during which the two suspects began slugging the victim and subsequently pulled blades they used to stab and slash the man, according to 1010 WINS. The 25-year-old was conveyed “to Lincoln Hospital in stable condition” after the pair snatched two chains, three bracelets, and a watch from him, with an estimated total value of $1,000, according to the outlet.

The incident comes as crime rates have climbed dramatically this year in the Democrat-run city.

The seven major felonies offenses have seen a 40.7 percent increase from January 1 to May 15 compared to the same period in 2021, the NYPD’s crime statistics show. Burglaries are up 33.6 percent, grand larcenies are up 53.1 percent, grand larcenies auto are up 58 percent, and robberies are up 42.5 percent compared to last year. While the crime rates have spiraled out of control under the watch of Mayor Eric Adams, the first-year mayor may reportedly be eyeing a presidential run in 2024.