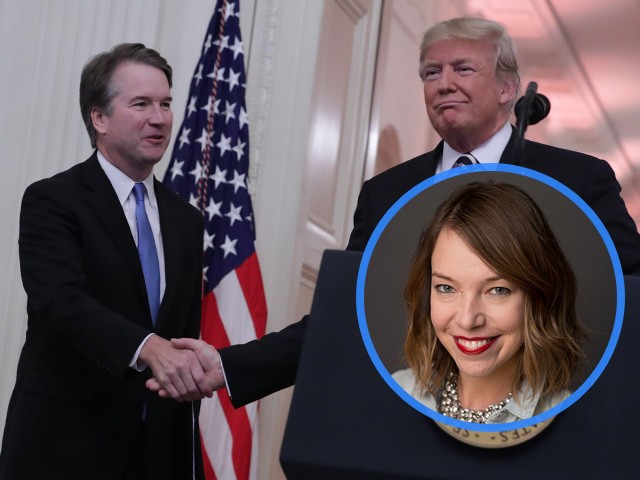 The Washington Post was forced to issue a humiliating correction Friday after an email proved its reporter Emily Heil had spread fake news about Brett Kavanaugh’s alma mater Georgetown Prep.

To make matters worse, this fake news was published in the Post’s “Reliable Source” section and took a full day to correct — but only after the Post attempted to stealth edit it with an update that was even more misleading.

Heil’s entire piece is falsely premised on the idea that the bitter confirmation of Kavanaugh to the Supreme Court resulted in Georgetown Prep (Kavanaugh’s former high school) being so tainted it felt the need to hire a “director of alumni relations.”

Here is how it read originally: [emphasis added]

And here is where things get interesting…

Prior to publishing, Heil (pictured) did reach out to Georgetown Prep and specifically asked if this particular “job had been posted before or after the Kavanaugh hearings.”

She sent the email Thursday at 11:30 a.m. and wrote, “I’m planning to write this today, so I’m hoping we can talk before 2 pmish.”

In other words, this job posting went up long before the Kavanaugh hearings and therefore had nothing to do with Kavanaugh; it was just a normal job posting for a normal opening at a normal prep school.

Nevertheless, the Post wrote and published the story anyway. And not only did the Post go ahead and publish, but the paper misled its readers with fake news about the Georgetown job being posted “this week,” which raises another point…

Where did the Post get the information that the job posted “this week?”

Who told Heil that?

On Friday morning, Georgetown Prep demanded a correction, and sometime during all of this, the Post attempted to stealth edit the piece — meaning: without admitting it had published fake news, the Post tried to remove the fake news hoping no one would notice. But look at how the Post changed the piece: [emphasis added]

This is even worse; this is the Post admitting it knows the Georgetown job posting went up in July and is not only trying to fool its readers with a secret correction but still hoping to mislead everyone.

As you can see, rather than inform readers the Georgetown job was posted in July — long before the Kavanaugh hearings — by withholding that vital information, the Post is still hoping to fool readers, still wants to insinuate the job was posted in response to the hearings.

Yes, the Post’s update is technically correct, but it is still deliberately misleading.

It gets even worse…

We now know that prior to publishing her story, Heil received the Georgetown email informing her of the July date. We know this because Heil admits she got the email and admits she read it — but claims she “read right over the date in haste.”

So, she got the email informing her of the July 2018 date, but still told her readers that the job posted “this week.”

Again, where did the “this week” date come from?

Who told Heil the job had been posted “this week”?

How did Heil come by that false information?

Anyway, only after the email from Georgetown Prep to the Washington Post was made public,  was the Post forced to correct its false story:

correction: A previous version of this story incorrectly stated that Georgetown Prep posted a job listing this week for a director of alumni relations. The school began advertising for the position in July.

Breitbart News has reached to Heil to ask where the “this week” misinformation came from. We will update this piece if there is a response.