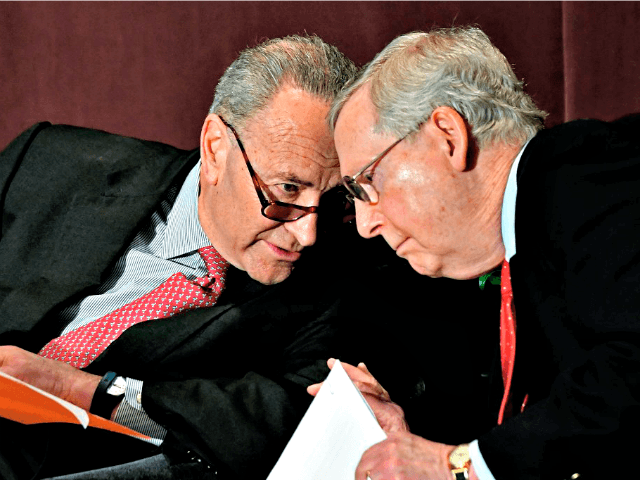 Democratic leaders directed their deputies on the 2019 border security panel to hide their negotiating victories from President Donald Trump, according to the Washington Post.

Democrats, privately, were amused but made a conscious decision not to gloat — concerned that if they celebrated what they considered a victory Thursday they might anger Trump enough to veto the deal.

One conferee summarized the instructions from Democratic leaders: “Don’t poke the bear.”

The Democrats followed the same ‘don’t gloat yet’ strategy in 2015 as they blocked then-House Speaker Paul Ryan‘s GOP agenda. RollCall.com reported in 2015 that Rep. Nancy Pelosi:

had instructed members in a closed-door meeting to “keep on their long faces” and not speak publicly about everything Democrats won in the omnibus, according to a senior House aide. She wanted them to avoid speaking about provisions they fought to include, as well as poison pill policy riders they insisted be removed, instead suggesting they just say they were “still reading the language” when asked how they planned to vote.

“Now they’re done, that’s it. There’s no way they can change the rule or anything like that; the speaker said it’s closed,” said Pelosi on Friday, “so we feel pretty good about bragging about what’s in the bill to get our votes and also not risking changing anything in the bill.”

The Democrats’ 2019 win came after Senate leader, Sen. Chuck Schumer got Senate Majority Leader Mitch McConnell in January to delegate immigration policy to the top leaders on the House and Senate appropriations committees.

In an article headlined “How Schumer and McConnell kept Trump out of the shutdown talks,” Schumer boasted to Politico:

“I said, ‘Here’s my proposal to you. Let’s do a conference committee. They are good at it, they get along, they’ve done the other six budget bills, they can do this,’” Schumer recounted in his office Thursday as a months-long funding crisis was concluding. “And he accepted. And I think that paved the way to getting this done.”

Trump’s Hill liaison chief, Shahira Knight, describes herself as an “honest broker” between the President and Congress, not as a champion for the President’s priorities.

McConnell’s agreement with Schumer is just one way in which the Democrats’ 2019 win was aided by GOP leaders.

Those GOP leaders also saved the deal once Trump realized his priorities were being discarded.

On the weekend before the draft budget was completed and passed on Thursday, Trump objected to the Democratic demand for a cutback in detention cells. In response, Democrats prepared a temporary budget if the GOP leaders failed to get Trump to sign the lopsided deal, according to Politico.

House Democratic staffers were busy preparing a stop-gap funding bill they could file as soon as Monday night if the last-ditch effort went nowhere.

“We thought the talks had completely blown up,” said one Democratic source familiar with the negotiations.

Amid Trump’s opposition, Democrats dropped the detention cutback to preserve their other gains, which include many curbs on enforcement, a temporary veto on wall construction for Texas Democrats, and a new amnesty hidden under the guise of protection for “Unaccompanied Alien Children.”

Press reports do not say that Shelby admitted those giveaways to Trump before Thursday morning when the final ten pages to the 1,169-page bill were released several hours before the Senate voted.

Republican leaders tried to hide their failure to get much money for the wall — after having House and Senate majorities in 2017 and 2018 — and also to hide the Democrats’ insertion of many policy wins for their side into the 2019 budget document.

In the House, Minority Leader Kevin McCarthy (R-Calif.) and Minority Whip Steve Scalise (R-La.) — Trump allies — wondered if they could get enough House Republicans to vote for the deal, considering it included less wall money than what Senate appropriators agreed to in December, before the shutdown, according to people close with them.

The pair set out to spin the agreement as a win nonetheless.

McConnell negotiated with Trump and promised to back a national emergency if Trump accepted the lopsided deal, despite his long opposition to the emergency plan. According to the New York Times,

President Trump awoke in a rage Thursday, feeling cornered into accepting a bipartisan funding deal struck earlier in the week that would deprive him once again of money for his long-promised wall along the southwestern border. Conservative commentators who had been cajoled into accepting the deal Wednesday were breaking their silence on Thursday.

By midmorning, after a particularly unpleasant meeting with the secretary of homeland security, Kirstjen Nielsen, the president was threatening to torpedo the deal, according to two people briefed on the exchange. Several hours and several phone calls later, McConnell had persuaded Mr. Trump to once again agree to sign the bill to avert another government shutdown looming at midnight Friday.

But persuasion came at a price: The president would declare a national emergency to try to secure wall funding without congressional approval, he told the majority leader — and Mr. McConnell would have to back him.

The tacit cooperation between GOP and Democratic leaders against Trump reflects the establishment’s bitter opposition to Trump’s policy of reducing immigration and of “Hire American.” Those two policies threaten to redirect money and political power away from the combination of Washington and Wall Street, and to boost Americans’ wages and independence from government.

According to the Post, “Democrats decided in the final days they needed to be careful with their language, worried they could provoke Trump into another shutdown. ‘He doesn’t seem to work on a totally rational basis,’ Schumer said in the Post interview. ‘Little comments throw him off.’”