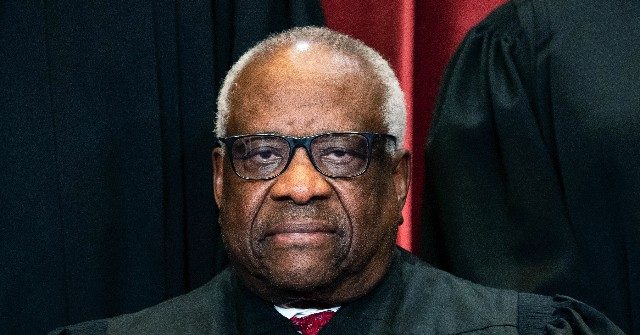 The far-left Washington Post has been charged with racism for alleging that Clarence Thomas, the second black justice to serve on the Supreme Court, issues rulings that reflect the “thinking of white conservatives.”

In an article about Rep. Jim Clyburn’s (D-SC) influence over President Joe Biden for his next Supreme Court pick, the Washington Post issued an overtly racist addendum to a quote from Rep. Bennie Thompson (D-MS) about Clyburn’s bona fides.

“‘If you know that a person has been vetted by Jim Clyburn, you know that person won’t go to the court and end up being a Clarence Thomas,’ referring to the Black justice whose rulings often resemble the thinking of white conservatives,’” wrote the “paper of record.”

The Washington Post later issued a correction after people on social media denounced the line as racist.

“A previous version of this story imprecisely referred to Justice Clarence Thomas’s opinions as often reflecting the thinking of White conservatives, rather than conservatives broadly. That reference has been removed,” it said.

Regardless of the change, the outlet’s treatment of Clarence Thomas was not lost on the broader public.

How it started vs. How it’s going pic.twitter.com/ekqVsJkcz9

So the Washington Post just casually refers to Clarence Thomas as an Uncle Tom and it’s just something that the rest of the journalists just let happen without speaking out. It’s just a thing that happens and they are fine with it. https://t.co/XDg9L8dWNo

After an outcry, the Washington Post has removed a reference to Justice Clarence Thomas as “the Black justice whose rulings often resemble the thinking of White conservatives.” https://t.co/Pmrx2YA8Qo It was a disgraceful but revealing reference…

This is journalism? Reporters @CleveWootson and @MariannaReports snidely identify Clarence Thomas — in a news story — as “the Black justice whose rulings often resemble the thinking of White conservatives.” Why don’t they just call him an Uncle Tom?https://t.co/5yvzO6Fv3c pic.twitter.com/8psN128xJk

And just like that, the @WashingtonPost, a far-left advocacy organization, published a racial attack against Justice Clarence Thomas, the only black on the United States Supreme Court.

This is the most disgusting thing I can remember seeing in a newspaper in sometime.

This bon mot in a reported analysis about Rep. James Clyburn’s credibility doesn’t even qualify as a dog whistle. It’s as subtle as an air horn. Via @Jeff_Jacoby.

Leftists at the Washington Post are trying to bully Justice Clarence Thomas again. When will they learn this doesn’t work? He’s his own man. His commitment to the Constitution and his judicial independence drive the left mad. He is a treasure to our nation. pic.twitter.com/HM8bM0BSLk