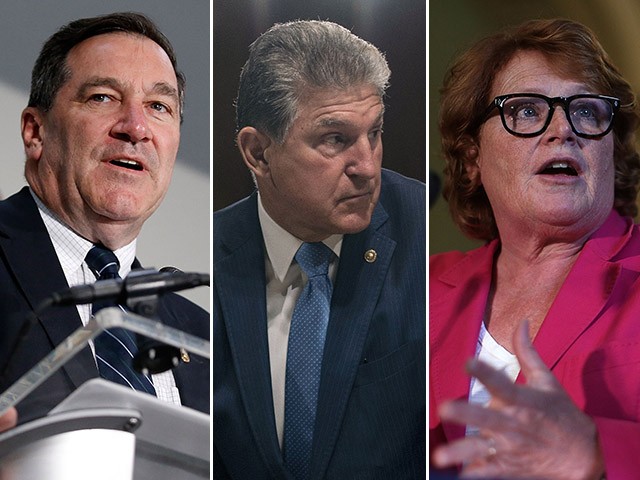 Several Senate Democrats up for re-election this year have remained open to supporting Judge Kavanaugh for the Supreme Court despite the sexual assault allegations brought against the president’s nominee.

Sens. Joe Manchin (D-WV), Joe Donnelly (D-IN), and Heidi Heitkamp (D-ND) face three of the most competitive races this cycle and have continued to watch the accusations against Kavanaugh unfold before they give a decision regarding their support.

Manchin told reporters on Monday, “I want everybody to be able to tell their side of the story if it’s validated, and I want him to have a chance to clear his name.”

“I just want to hear all the facts, hear what everybody has to say,” Sen. Donnelly said. He contended that he is not facing pressure to vote to confirm the nominee, stating, “No. I’ll just do what’s right, no matter what.”

Heitkamp told reporters on Monday that the allegations need to be “looked into,” but he declined to elaborate. Rep. Kevin Cramer, Heitkamp’s Republican challenger, leads the North Dakota Democrat by four points according to a poll released this month.

“Look, we’re paying close attention to the allegations. I’ve got other issues, too, that I want to talk to him if we can ever get an in-person [meeting] with him,” Tester said, citing privacy, abortion, and campaign finance. “We’ve got a long list. And these allegations will also be a part of it.”

A survey last week found that Rosendale and Tester are in a virtual tie at 44 percent each.

While Manchin, Heitkamp, and Donnelly face increasing pressure to back Kavanaugh for the Supreme Court, they will likely not signal if they will support him until after he receives a 50-vote majority for Senate confirmation. The 50-vote majority largely rests upon Sens. Lisa Murkowski (R-AK) and Susan Collins’ (R-ME) supporting Kavanaugh for the Supreme Court, but they will wait on deciding until they hear California psychology Professor Christine Blasey Ford’s testimony about the sexual assault allegations against Kavanaugh.

If Collins and Murkowski back Kavanaugh for the Supreme Court, Manchin, Heitkamp, and Donnelly will face continued pressure to vote to confirm him.

In contrast to the three Senate Democrats, Sen. Claire McCaskill (D-MO) announced last week she will vote against Kavanaugh, saying the accusation against him was “troubling” but did not factor into her decision against the nominee.

McCaskill is considered one of the most vulnerable Senate Democrats. A September poll found that Missouri State Attorney General Josh Hawley is now tied with her for the Missouri Senate race.

McCaskill said that Kavanaugh “has revealed his bias against limits on campaign donations which places him completely out of the mainstream of this nation.”