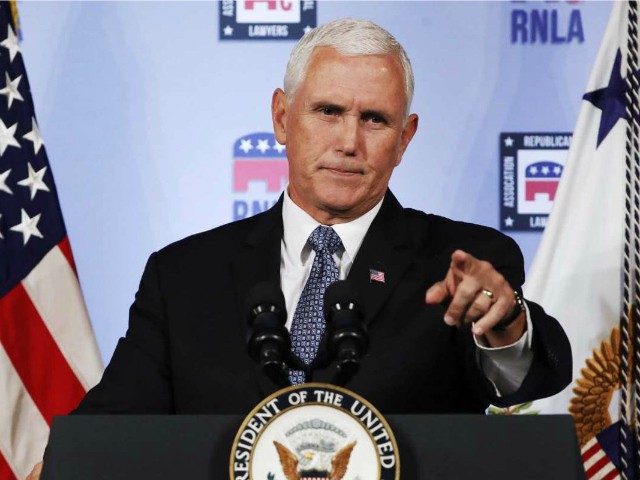 “The Truth is Missouri’s other Senator, Claire McCaskill, was there with the Democrats in the Senate every step of the way,” Pence told Missourians gathered in a Missouri convention center. “Claire McCaskill supported the Democrats’ search and destroy tactics, and it’s just one more reason why Missouri needs to fire Claire McCaskill and hire Josh Hawley as your next United States Senator.”

He pointed to the anguish Kavanaugh’s family, the U.S. Senate, and the nation have been put through. “The way some Democrats in the Senate conducted themselves in this confirmation process was just terrible. They threw away basic fairness, due process, the presumption of innocence. They literally tried to wreck the reputation of a good man just to prevent another conservative from making their way to the highest court in the land.

Earlier, from the tarmac at the Springfield-Branson National Airport, Pence stood next to Hawley as they spoke to reporters.

“Missourians know that control of the United States Senate may very well come down to this race right here in Missouri,” Hawley said. “Everything that the voters of this state voted when they voted for the Vice President and the President in 2016 is on the line in this election.

“Our voters voted to keep America strong, to rebuild this country,” Hawley said, adding this is what President Trump is accomplishing.

“Now the Democrats, and you see this in Washington these recent weeks, they want to take all of that away. They are hungry for power, they will stop at nothing,” charged Hawley. “We have to defeat them in November. That’s what this election is all about.”

President Trump campaigned for Hawley in late September, holding one of his Make America Great Again rallies and promoting Hawley. He told the massive crowd, “Get out in 2018, because you’re voting for me in 2018” and warned against complacency.