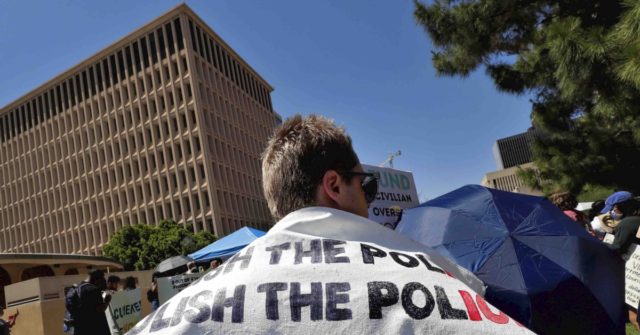 Calls to “abolish” or “defund” the police have appeared at nationwide protests against the killing of George Floyd by police in Minneapolis, Minnesota, last week.

I’m sorry, but “abolish the police” seems like a poorly-thought out idea that’s gotten popular with shocking speed

Immediately, the left pushed back.

Beauchamp attempted to defend his position:

Lotta people telling me that this isn’t to be taken literally, that it’s a call for defunding or reform. That’s not quite accurate; read interviews with police abolitionists and there’s a weird motte-bailey maneuver on this point https://t.co/SaHq5UjiIM

Then he began to retreat, calling the idea of “shrink[ing]” the police “much more defensible” than abolishing them:

Similarly, this piece has a lot of good ideas on how to decrease the role of police in our lives but ends with “shrink and eventually abolish police.” Those are different goals, one much more defensible (politically and substantively) than the former https://t.co/L7U9v5Jxuf

I really appreciate the good faith replies here making the case for police abolition. Lots of good arguments! But the condescending assumption that I had never heard of the idea before today nor read about it before — because I think it’s “poorly thought out” — is annoying.

Finally, he capitulated and apologized.

Talked to a number of people I respect about the framing of the original tweet and I do feel like it was a mistake. It was far too dismissive and then I — ironically — complained about condescending replies.

We all send bad tweets sometimes. This was one of mine.

The idea of defunding the police has already been accepted by mainstream Democrats.

On Wednesday evening, Los Angeles Mayor Eric Garcetti — a “moderate” who was a relatively early supporter of former Vice President Joe Biden — announced plans to cut the L.A. Police Department budget by up to $150 million.

The money would be used, he said, to “reinvest” in “communities of color.”