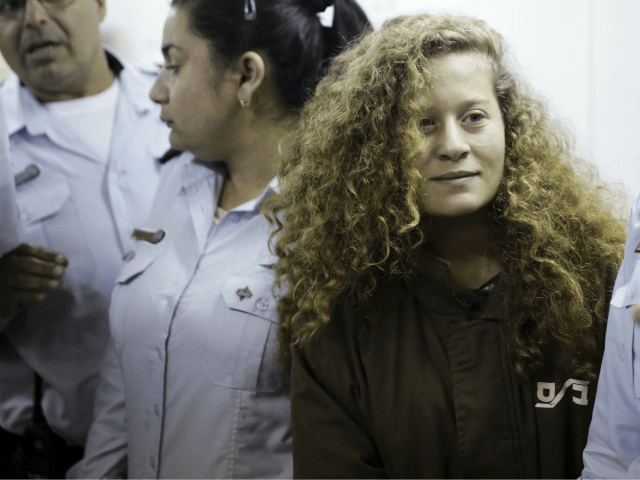 Tamimi was jailed for seven months along with her mother for slapping and hitting Israeli soldiers in an incident captured on video. Footage of the episode quickly went viral and Tamimi, 17, has since become an icon of Palestinian resistance.

The Vogue piece is entitled, “Occupied Childhood” and retells Tamimi’s personal account of life in and after prison.

“Since I was released on July 29, I have become a spokesperson for the Palestinian cause, which is not easy,” Tamimi wrote in Vogue Arabia. “With this role comes a great deal of responsibility and pressure. … People often ask where I find my strength and courage to stand up to the occupation, but I am experiencing a situation which forces me to be strong.”

Tamimi’s history of throwing stones, attending violent protests organized by her father, and goading Israeli soldiers into a reaction on camera, has earned her the moniker Shirley Temper. Other members of her family, including a cousin Ahlam Tamimi, have been involved in deadly terrorist attacks.

“I have been involved in demonstrations and confrontations with the Israeli army since I was a child,” she wrote in Vogue. “Many criticize that, but why not criticize the army who places itself in front of children? Under the occupation, everything is a crime. People should not accuse us; it is the occupation that is wrong.”

Tamimi said she wants to study law and fight for the Palestinian cause on an international scale.

“I understand that I have this role now, but I have no privacy anymore,” she said. “Sometimes I feel like I am losing myself — my personality. People ask me what life was like in prison, but I wish I didn’t have to talk about it. I just want to forget.”

“Vogue Arabia interview’s [sic] with Ahed Tamimi is the last piece to complete the puzzle to create the new face of the Palestinian propaganda machine,” he tweeted. “A perfect story for the media: Young Palestinian girl with blonde hair who suffers from the ‘occupation’ and was jailed in Israel.”

In August, Breitbart Jerusalem reported on the Arab world’s surprising response to her release, with many Arab social media users circulating images of the “lucky” Tamimi who, upon her release from prison, looked healthier than ever and had even gained a considerable amount of weight while imprisoned Arab women in next door Syria are tortured, raped and starved.

The difference between Israel and Bashar AlAssad#AhedTamimi lucky girl Because it was in Israel’s prison not Assad’s prison
ahed Tamimi came out of prison in good health, better than before.
Notice : The father of ahed Tamimi supports Assad’s regime pic.twitter.com/nkd6T4mhRY