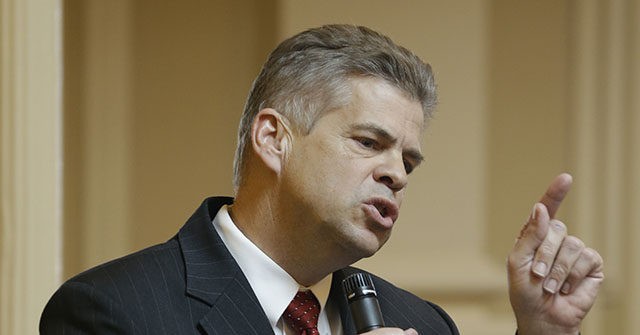 Cox, a longtime state lawmaker who was a public school teacher for 30 years, said his state’s current Democrat leadership under Gov. Ralph Northam (D) does not “have another second right now” to spare in reopening schools that have been closed or partially closed to in-person learning because of Democrat coronavirus mandates.

“We’ve got three to six months of learning loss in reading and math right now,” Cox said. “You’ve got kids who have missed an entire senior year. … You’ll never get that back. You’ll simply never get it back.” He added that he is pushing a proactive tutoring effort, that he himself as a former teacher will partake in, to aid in repairing the learning loss damage already done.

Cox emphasized the gravity of the issue, which he said Democrats are “slow-walking” despite an increase in student absenteeism and failing grades.

“[Parents] are working two jobs. You’ve got two kids home alone, maybe a fourth grader and a sixth grader trying to do it themselves, and so absenteeism is up dramatically. Fs are up 350 percent in Northern Virginia. It has been devastating. I just can’t imagine, with my four boys. Luckily they’re in their 20s so this didn’t happen to them, but it’s just stuff you’ll never get back, and we have got to turn this around quickly. You don’t have another second right now,” Cox warned.

Cox is one of several candidates vying for the Republican nomination for governor to replace Northam, who is term-limited and cannot run for reelection this year. He vowed, if elected, to install a Republican as the secretary of education and superintendent to lead the Education Department away from “equity”-themed teaching that includes critical race theory (CRT).

“To me CRT basically says that America is a fundamentally bad place and our country is broken,” he explained. “We used to teach, to me, our kids that our country came together from different backgrounds to form the great American melting pot. But now kids are being taught with this theory to seek out and scrutinize differences in a way that divides rather than unites. … [Democrats] just want to remake education.”

A recent recommendation Cox saw from a task force to the state Board of Education included classroom focus on “culturally inclusive and equity-centered practices that disrupt intentional and unintentional racism in education.”

He assessed that teachers are under pressure to teach based on how they are trained and evaluated, and that they are currently not being evaluated on how well they teach key documents like the Declaration of Independence, for instance, or how well they maintain discipline in their classrooms.

“It’s almost criminal to think of this, and this is how they basically, to me, take over the education system,” Cox said. “I think they probably understand eventually politically this doesn’t sell, but once you have the education system dominated in K–12 and higher ed, you’ve created a whole group of people that can’t critically think and don’t know about the values of this country.”

Other candidates seeking the Republican nomination to run for governor include two businessmen, Glenn Youngkin and Pete Snyder, and state Sen. Amanda Chase. Cox said that, as an experienced lawmaker and former teacher, he believes he can run the best campaign against the presumed Democrat nominee, former Virginia Gov. Terry McAuliffe (D), and that education will be a campaign issue that affects Northern Virginia, the bluest and most densely populated region of the state.

“You’ve got parents furious up there. The schools aren’t open. Thomas Jefferson, which is the best governor’s school in the nation by U.S. News & World Report, is now, because of the Democratic school boards and Democratic leadership, is not going to be merit-based. It’s going to be basically open enrollment,” he said. “So there’s a mix of issues we have not had frankly that we can appeal to. They’re kitchen table issues. They’re issues that frankly attract swing voters and soft Democrats.”

A remote-style nominating convention for the Republican candidate taking place across multiple polling locations occurs on Saturday, and a record number of more than 50,000 delegates are signed up to vote through a ranked-choice voting method.

Cox believes the Republican candidate has a chance in the blue-leaning state to take back the governorship, which Democrats have held since 2014. He said, “People are looking at one-party Democrat control both with Biden and in Richmond, and I think you’ll see some buyer remorse.”