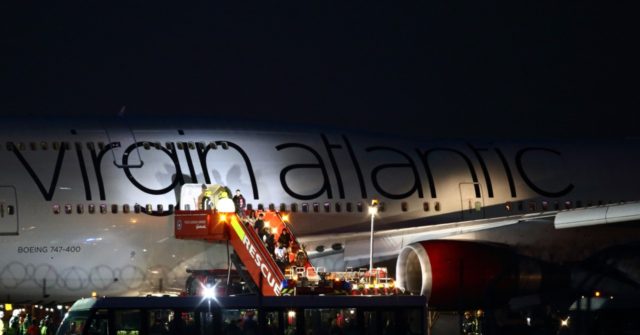 A fire caused by a portable battery pack forced a Virgin Atlantic flight to make an emergency landing Thursday after flames began emanating from a passenger seat.

The flight, which was en route to London Heathrow from New York’s JFK Airport, made an emergency landing at Boston’s Logan Airport after the crew extinguished the flames. Reports state all 217 passengers were evacuated successfully upon landing.

Passenger Cory Tanner, 28, told reporters he and everyone else smelled smoke “not even 30 minutes” after the plane took off from JFK Airport.

Tanner said before passengers were evacuated from the plane, firefighters boarded the aircraft to inspect the site.

“The firefighters were loaded on before we could get off,” he commented. “People were definitely nervous just because we didn’t know what it was.”

Massachusetts State Police reports said they found “A battery pack consistent in appearance with an external phone charger” wedged in between the cushions of the passenger’s seat where the flame originally was ignited.

Virgin Atlantic reassured customers in a statement safety was always their top priority and that “we are currently investigating to fully understand the circumstances. All our customers were offered overnight accommodation and onward travel today (Friday).”

The Federal Aviation Administration (FAA) in 2016 banned Samsung Galaxy’s Note 7 cellular phones from being carried on flights in the United States after it was discovered that an error in manufacturing caused the phone’s battery to overheat and sometimes explode. Reports state that because of this, more than 2.5 million of the phones were recalled by the Korean company.

Lithium ion batteries can pose a potential fire risk, one reason being that batteries can overcharge and begin to heat up if they are used with an incompatible charger. However, some battery packs have built-in safety mechanisms that turn off the device if a problem is detected.