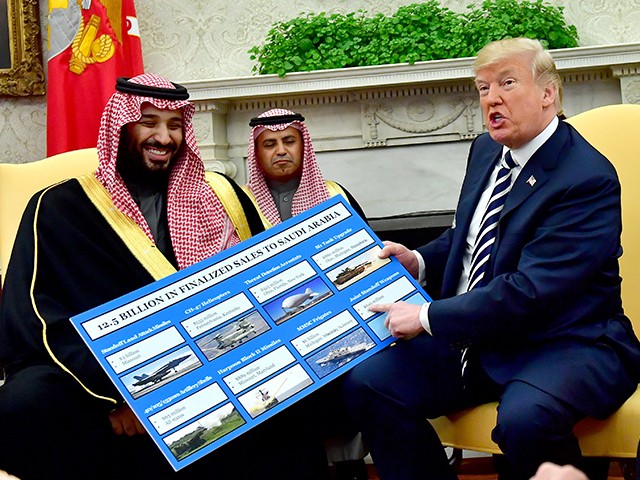 The establishment media has its truth—at least its version of it. For instance, ever since Jamal Khashoggi disappeared in Istanbul on October 2, The Washington Post, which employed Khashoggi as a columnist, has run daily stories on his fate—hundreds of stories in total. Needless to say, the Post’s drumbeat is still going strong; just on October 18, it bannered, front page above the fold, “Amid global outrage over Khashoggi, Trump takes soft stance toward Saudis.”

In that headline, of course, we see not only concern about Khashoggi—by now presumed to be dead—but also the Post’s other agenda: sticking it to President Trump, for his alleged “softness” toward the Saudis.

The rest of us might fairly conclude that the Post, and the establishment media overall, dislike President Trump so much that they grab every opportunity to bash him and his policies, no matter what the long-term consequences to the U.S. might be. So in this instance, they are using the Khashoggi issue to derail Trump’s policy toward Saudi Arabia and toward the Middle East overall—including Iran.

In addition, we should take note of the role of Deep State intelligence operations—of both Turkey and the U.S.—in fomenting the Khashoggi story. Every day the Deep Statists uncork a new gusher of leaks to a stenographic media, all aimed at convicting the Saudi government of murder–and the Trump administration of complicity.

In fact, the leaked details have a way of becoming ever more gruesome. First we are told that Khashoggi was killed in the Saudi consulate, then are were told that his body was chopped into little pieces, then we are told that he was dismembered while he was still alive. These ever-more-lurid details could be true, or they could just be products of an escalating imagination, aimed at keeping the press hooked on every bloody morsel of detail. So what’s actually true? For that, we’re supposed to trust the media.

Yet in fact, if we step back from the immediate frenzy and look at the bigger picture, Trump’s policy toward Saudi Arabia isn’t really any different from that of his predecessors. Ever since President Franklin D. Roosevelt made a pact with King Ibn Saud aboard the U.S.S. Quincy on February 14, 1945, it has been American policy to protect Saudi Arabia and, of course, its oil. We should pause to emphasize the “o-word,” oil, because yes, the U.S.-Saudi relationship has always been based on the pragmatic calculation that the country’s enormous oil reserves were vital to Western prosperity.

Moreover, by the same token, Uncle Sam deemed it vital to keep that oil out of the hands of the Soviet Union, or any other hostile power. We might note that this policy judgment was not based on any great affection for the Saudis. Indeed, it’s worth recalling that at the time of FDR’s parley, Saudi Arabia still had slavery; it was not abolished in the kingdom until 1962. Indeed, to this day, Khashoggi aside, Saudi Arabia’s human-rights record is to regarded as, well … decide for yourself.

It’s also worth recalling that, with their oil wealth, the Saudis have been steady purchasers of U.S. products, including weapons; in fact, the kingdom regularly ranks as the largest foreign purchaser of American arms.

Estimates as to how many U.S. jobs those sales have created or will create vary enormously, from the tens of thousands to the hundreds of thousands, and yet the one thing we know for sure of is that the number is far more than zero.

Yet unfortunately for them, the workers who manufacture, for example, the THAAD missile defense system in Troy, Alabama, don’t typically have much of a voice in high policy circles, and so it’s easy for the policymaking elite to ignore them. Thus Sen. Jack Reed of Rhode Island, the top Democrat on the Senate Armed Services Committee, can glibly demand that the U.S. not approve any more arms sales unless to Saudi Arabia until the Khashoggi matter is cleared up to his satisfaction.

Of course, since the chances are slim that the elite will ever be satisfied with any Trump administration policy, it’s a good thing that the President—joined by members of the Alabama congressional delegation—is actively looking out for the livelihoods of the folks in Troy.

Thus we can see: The U.S.-Saudi relationship has always been based on hard-nosed realpolitik. It’s based on the pragmatically realistic assessment that we have to deal with the Saudis as they are—including what they can offer us—and not as we might wish them to be.

Such realism, of course, is the essence of effective diplomacy. After all, a country doesn’t really need diplomats to deal with its likeminded friends, because that’s easy; you can talk with your pals over coffee and coffeecake.  Instead, diplomats are truly needed to deal with the world as it is: full of enemies and potential enemies.

So now, for the U.S., the challenge is to keep our eyes on the prize. And the prize is a Middle East that’s at peace, including peace for Israel. And yes, too, another aspect of the prize is a Middle East in which Iran is contained. Such containment, we might note, would mean a a sharp turnaround from the Obama years, when Iran, propelled by the Obama nuclear deal, extended its influence through Iraq, through Syria, through Lebanon—all the way to the Mediterranean Sea.

So to succeed in these Middle Eastern objectives, the Trump administration has sought to join with Israel and Saudi Arabia in a tacit three-way alliance. Given that Israel is Jewish and Saudi Arabia is not only Muslim, but also the official protector of the Muslim holy cities of Mecca and Medina, this alliance was never going to be easy to maintain. And yet it’s vital that we maintain it.

Why, we could even say that keeping the American-Israeli-Saudi coalition together is more important than the fate of any one individual. So now we might ask: Who was this Khashoggi, anyway?  He is routinely portrayed as some sort of do-gooding reformer, and yet in fact, he was not at all the paragon of Western liberalism that he has been made out to be.  He was an ardent supporter of the Muslim Brotherhood who dreamed, to the end, of creating an Islamic republic. As one U.S. intelligence veteran put it, “For Khashoggi, secularism was the enemy.”

To be sure, in American eyes, such political beliefs don’t justify murder, but then, of course, he wasn’t an American, his alleged killers weren’t Americans, and his presumed death occurred on foreign soil. So Khashoggi’s demise wasn’t exactly Pearl Harbor.

So yes, let’s have a full investigation of Khashoggi’s disappearance. And let’s take action against the bad guys, as appropriate. Yet at the same time, let’s confine ourselves to meting out simple justice, such as it might be, as opposed to anything more geopolitically grandiose—or disastrous.

Let’s always keep in mind that our track record of actually improving Arab and Muslim countries is poor—actually, worse than poor. Just in the past four decades, we’ve actively sought to change the ways of Afghanistan, Egypt, Iraq, Lebanon, Libya, and Syria; a look back at those ventures tells us that we’ve succeeded in exactly none of these countries, and, in some cases, we’ve made things vastly worse.

So if we were to seek to “reform” Saudi Arabia, what would happen? Would the Saudi government respond by inviting in the Russians, or the Chinese, to replace us as protectors? Or would the country be occupied by Iran? Or would it collapse, thereby opening the path for al Qaeda or ISIS? And yet in the end, the Saudis—at least the surviving Saudis—would still be, well, Saudi.

So the better goal—the more realistic goal—is for the Trump administration to keep working with this Saudi government. Nobody’s suggesting that any American need feel fond, or admiring, of the Saudis, but that’s not the point of power politics.

Our goal should be to strengthen this country, and to advance our interests in the Middle East, including those of our allies. So if we have a friend, not an enemy, in Saudi Arabia, that’s a good thing, not a bad thing.