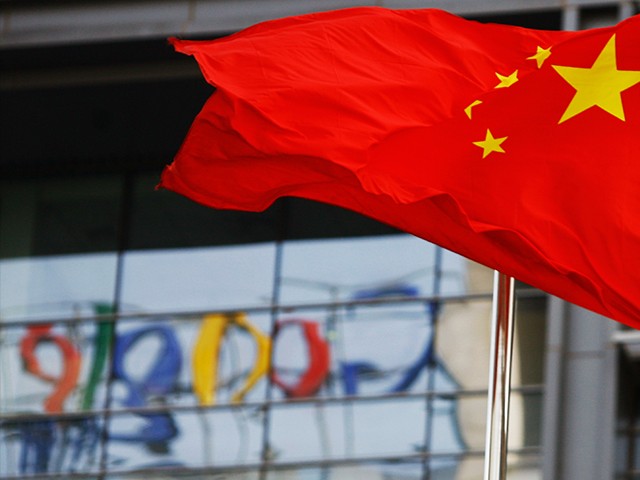 On October 4, Vice President Mike Pence delivered an extraordinarily tough speech on China that included some tough words about Google as well.

The headlines about Pence’s speech mostly focused on his vow to counter China’s interference in U.S. affairs, including its continuous hacking of our intellectual property. Going even further, Pence said flatly that China is “meddling in America’s democracy” and, in fact, is seeking to drive President Trump from office; as he put it, China “wants a different American President.”

Indeed, even Americans who would love to see Trump driven from office are starting to share the Trump administration’s concern about China. Coincidentally, on the same day as Pence’s speech, the decidedly anti-Trump Bloomberg News published a story underscoring the Trump-Pence case against China; the report detailed Chinese hacking of top U.S. tech companies.

Meanwhile, in its take on Pence’s speech, the Beltway-buzzy publication Axios noted “a growing consensus among China watchers: we’re entering a new era of U.S.-China relations, driven by competition and confrontation.” In other words, the Clinton/Bush 43/Obama policy of “partnership” with China is over. About time.

The Trump Administration Gets Tough on Google—But Tough Enough?

So in this new and more realistic context, we might examine Pence’s comments about Google and its too-cozy relationship with the People’s Republic of China. Because if we’re entering into a Cold War 2.0, then all commercial relationships with China will have to be reassessed, if not terminated outright. And Google is the one corporation that Pence singled out.

Specifically, the Vice President cited Google’s work on “Dragonfly,” a mobile search engine that would be controlled by the police-statists in Beijing.  Pence declared: “Google should immediately end development of the Dragonfly app that will strengthen Communist Party censorship and compromise the privacy of Chinese customers.”

Interestingly, Google, which has notably ramped up its D.C. presence in recent years—in fact, it spent more money on Washington lobbying than other company in 2017—has had no official comment on Pence’s speech.

Still, Google is so powerful, and so worldwide, that it’s hard to know what’s going on with a company that operates in 219 countries and territories. In addition, Google has also made more than 200 acquisitions, in countries from Brazil to Taiwan to Ukraine; it even has its own international venture-capital arm. In other words, some subsidiary, or partner, or contractor, operating somewhere, could be doing just about anything.

Indeed, Google is so large that it deserves to be its own “ism”–as in “Googleism”–right alongside globalism.

Google has been one of the most important and powerful companies in America for most of the last two decades. As far back as 2002, the word “google” as a verb—as in, “to google”—was named by the American Dialect Society as one of its “words of the year.”  Today, just about everyone uses the verb.

Not surprisingly, Google (now officially known as Alphabet, with Google as its main subsidiary) has a huge financial footprint that matches its sociocultural footprint; the company boasts a stock-market capitalization of well more than $800 billion.

Moreover, Google has a humongous presence everywhere in the world; it accounts for 86 percent of all searches on the planet. As the Silicon Valley behemoth likes to say about itself, “Our mission is to organize the world’s information and make it universally accessible and useful.” Now of course, each of us might have our own interpretation as to what Google’s credo might indicate about our privacy, and yet the words are right there, today, on the company’s “About” page. As such, more than any other tech company, Google bids to be a sort of planetary brain.

So we might ask: If, like it or not, Google is our collective consciousness, then what’s on Google’s mind? What is it thinking as it does so much of our thinking for us? Until recently, Google’s public face led with the kind-sounding phrase, “Don’t be evil.” Why, one can imagine that those soothing words offered reassurance to those who might have been fearful that Google’s brain could become an automated Big Brother, as seen in, say, the 1970 movie Colossus. So it’s perhaps revealing—to say nothing of ominous—that those kindly words are no longer a part of Google’s handbook.

Of course, Google has plenty of critics and always has. In 2004, a short video, EPIC 2014, made its appearance, envisioning a dystopic world controlled by Google, joined by Amazon. And every so often since, glimpses of Google’s ambition come peeping through.  In 2013, for example, a headline in The Business Insider blared, “Google’s Plan To Take Over The World.” As the site explained, “Google isn’t just the backbone of the Internet anymore. It’s rapidly becoming the backbone of your entire life, all thanks to data you’re voluntarily giving up to a private company based on your Web searches, photos, Gmail messages, and more.”

And yes, sometimes Googlers, or at least ex-Googlers, wish to get some things off their chest—or off their conscience. For instance, just on October 5, Jessica Powell, a former Google public relations chief, ripped into her former employer: “We go about saying that we’re building these amazing things and doing great things for the world, but we’re also causing a lot of serious problems.”

For conservatives, one serious problem is Google’s political bias. We know, for example, that Google was strongly supportive of Hillary Clinton in 2016, giving her campaign more than $1.6 million, making Google her largest single source of funds. In addition, thanks to a scoop from Breitbart News, we can see, on video, the deep disappointment, even outright distress, felt by Google’s corporate leadership after Clinton lost.

Still, the Googlers and the Clintons were particularly close; the company and its employees gave many millions, for instance, to the Clinton Global Initiative. Most notably, Google’s senior leadership was eager to play the largest possible role in Hillary’s most recent presidential campaign. Google’s then-executive chairman,  Eric Schmidt, personally invested millions to help Clinton; and a Wikileaks e-mail, dated April 2, 2014, showed John Podesta, the campaign’s chairman, writing about Schmidt to the campaign manager, “Clearly wants to be head outside advisor.”

To be sure, Google has been eager to help other Democrats, too. Over the past few electoral cycles, its donations to Democrats have typically exceeded donations to Republicans by a ratio of three to one.

Okay, so that’s Democratic partisanship and cronyism, of which Google has plenty. But what about ideology?  Do Googlers believe in anything other than just a Democratic Party victory?

Some further clues about Google’s ideology have emerged from its corporate choices. For instance, it seems to adhere to an internal orthodoxy of political correctness, which helps explain why it recently refused to work with the U.S. Department of Defense.

Yet bizarrely, even as Google snubs Uncle Sam, it seeks out Uncle Panda. As we have seen, it has avidly, albeit quietly, sought to do business with China, and when the news leaked out, it went on a massive hunt, not for the person who had the bad idea of helping Chinese totalitarianism, but for the leaker.

Yet as we drill down further, we can ask: Are Google’s left-wing beliefs reflected in its search product?  Do its fabled algorithms tilt one way or another?

The tech titan hotly denies it, but it seems clear that Google’s searches are, in fact, biased. Back in June, a digital strategist named Eric Wilson noticed that if he searched “California Republican Party,” the word “Nazism” was listed as one of its beliefs. And in August, PJ Media found that 96 percent of Google search results for “Trump” were liberal outlets. Meanwhile, Fox News has also documented the company’s systemic bias.

However, no portal has done more to uncover Google’s left lean than Breitbart News. In that same post-2016 election video scoop, we see, for example, Google’s top leadership decrying “white privilege,” as well as worrying about all the many other injustices sure to come from a Trump presidency.  So it seems that ever since, Google has happily been a part of the #Resistance.

As Breitbart’s Allum Bokhari wrote in August, “Of all the politically biased tech giants, Google is by far the most dangerous.”  And that was before, we might note, Bokhari found e-mail correspondence in which a Google employee referred to Rep. Marsha Blackburn (R-TN) as a “violent thug” and a “terrorist.” Meanwhile, on October 8, Breitbart also reported on that a top Google executive tweeted, in the wake of Brett Kavanaugh’s confirmation to the Supreme Court, that “evil” and “treasonous” Republicans will “descend into the flames” of hell. So yeah, there’s reason to think that bias might be an issue.

Perhaps most profoundly and disturbingly, on October 9, Breitbart’s Bokhari scooped on an 85-page briefing paper, in which Google said that its mission was to be the “Good Censor.” The Good Censor, that is, for the world.

So we can see: For all their Democratic partisanship, top Googlers have much grander ambitions than simply picking and choosing which Democratic candidate to support in which Congressional race—or even which Republicans are terrorists and which will go to hell.

In fact, underneath their partisan biases, flagrant as they might be, there’s a genuinely new kind of ideology emerging among the Tech Lords, including Google. With all that money and all that power, of course it’s all going to spawn a new way of thinking. And it won’t just be censorship.

A good perspective on this phenomenon comes from Gregory Ferenstein, a veteran chronicler of tech politics.  As he explains, “Tech elites love the Democratic Party in the same way they love the health care, transportation, and education industries —as a hodgepodge of aging leaders ripe for disruption.” [emphasis added]

Thus we can see: The Tech Lords see the Democratic Party as a vessel,  a mostly empty old vessel that they can seize control of and fill up with their own new thinking.  As Ferenstein puts it, “The core philosophy of Silicon Valley is that nearly all change, over the long run, is progressive.”

We can note that in this instance, the word “progressive” is mostly stripped of its familiar lefty resonances; it simply refers to the process of change.  Yes, obviously, the Tech Lords like change, the more the better; it’s good for their bank account, and it’s good for their ego.  And yet of course, if change goes churning through existing institutions like a lawnmower, well, that has a cultural, as well as political, impact.

Specifically, we might ask: What becomes of a mowed-down America? And the rest of the world? And what’s the fate of humanity, in all its cultural and political variation? Are we all to be mowed down—disrupted–for Silicon Valley’s profitable amusement? The Tech Lords would probably say: That’s not our problem.

This endless mowing—this process of progressive disruption around the globe —doesn’t yet have a handy handle. So for the time being, we might just as well call it Googleism.

We started with a consideration of China and Google, and that’s where we can return. In scorning Google’s all-too-eagerness to do China’s bidding, Vice President Pence was echoing, of course, President Trump, who has been sounding nationalist and anti-globalist themes for decades. For instance, back in July 2016, Trump summed up his worldview: “Americanism, not globalism, will be our credo.” And nothing has changed since, except that China is looming as an ever-greater threat.

For its part, Google grew up in the Clinton/Bush 43/Obama era. So surely the company sees China as just one more stepping stone on its way to international corporate hegemony. But as we have seen, in 2018, the Trump administration has other ideas.

The president and the vice president, backed by their team, believe that Googleism should not be synonymous with globalism. Instead, they think that Google should be loyal to America.

Googleism vs. Americanism: that showdown is coming.