In the week after former president George H.W. Bush died, the warming of relations between Trump and the Bush family was obvious.  As we know, the 45th president issued a generous statement of condolence, then ordered the federal government closed for a day of mourning, then visited Bush 41’s casket at the Capitol Rotunda, and then attended the funeral service at National Cathedral.

To be sure, there’s nothing wrong with fit and proper tributes to a late president, and yet in Washington, on any occasion, no matter how somber, it’s always necessary to keep one’s political wits.  As president back in the 1990s, Bush 41 lost his; he was gulled by a phony promise of bipartisanship, suckered into a disastrous tax deal—and ended up as a one-term president.

We’ll get to that sad saga, and what lessons it offers to Trump today, in a moment.  But in the meantime, we might note the sudden warmth in Washington in a wintry week.  As Politico headlined on December 5, “Washington hits pause on partisan feuds to honor George H.W. Bush: The funeral for George H.W. Bush brings together the Trumps, Obamas, Bushes and Clintons in a political détente.” 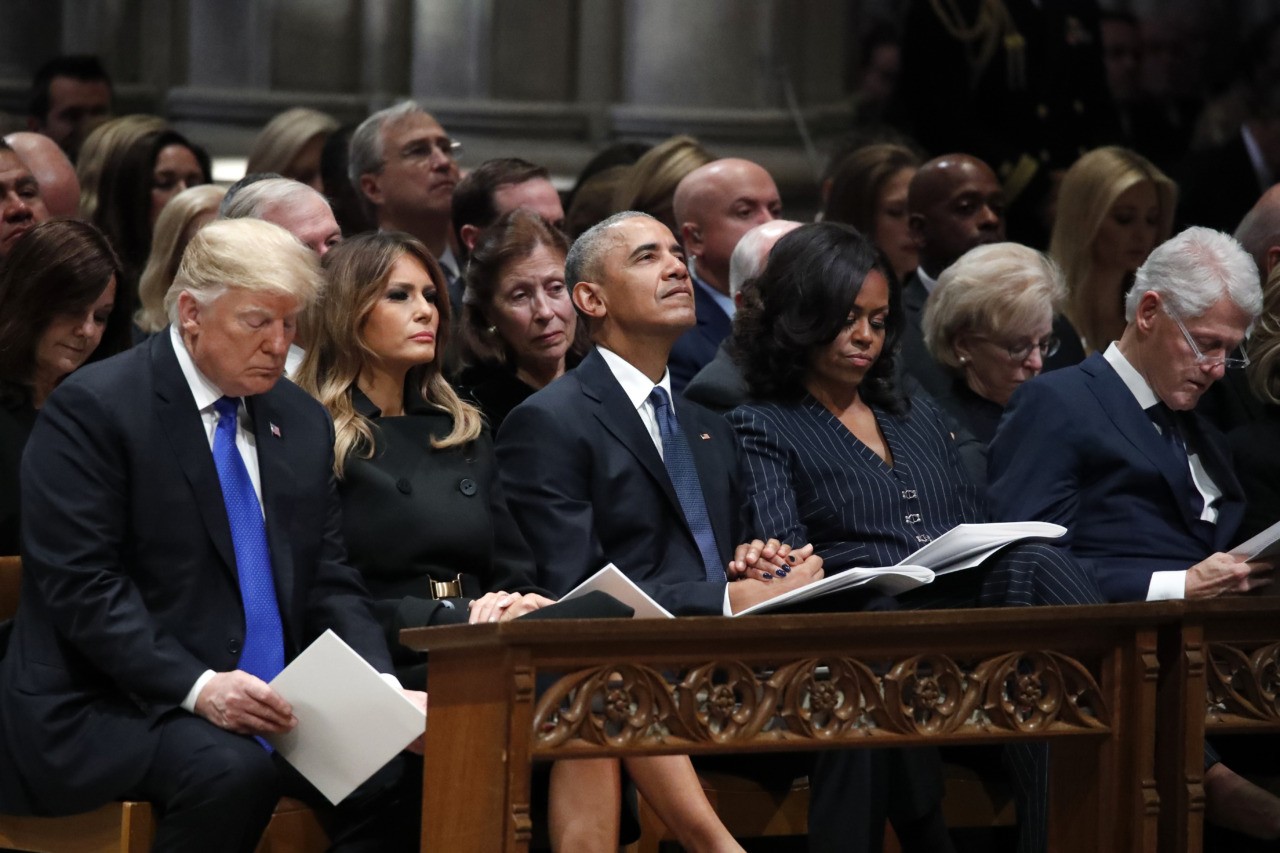 Yet of course, with the MSM, there’s always an anti-Trump subtext, as seen in this Washington Post header from the same day: “Bush funeral: Trump sits with fellow presidents but still stands alone.”

Even so, despite all the hard feelings of the last few years, the Bush family itself was gracious.  That large spirit was in sharp contrast, of course, to the gracelessness surrounding the September 1 funeral of John McCain, which turned into a festival of Trump-bashing.  Breitbart News’ John Nolte took note of the stark difference in the two services, adding, “The Bush family’s simple and decent act of burying the hatchet with President Trump, their patriotic act of making the president (and by extension his supporters) feel welcome and honored at these services, that is true patriotism, and that is what American democracy is supposed to be about.”

Yet while there’s certainly nothing wrong with getting along, there’s always a political risk in being too trusting.  Specifically, the political risk is that the new warmth between Trump and the Bushes could somehow entice Trump to follow the Bush 41 path of attempted conciliation with unreconcilable foes, thereby dooming his re-election chances in 2020.

Indeed, some Trump supporters are already sending up warning flares.  On December 4, NBC News took note of the sudden chummy spirit inside the Beltway, including a new “toned down Trump.”  As NBC reported, “One person close to the White House expressed concern that this brand of flexibility—paired with the impetus to deal with the new Democratic majority in the House—might lead him to move into a bipartisan space that could put some distance between him and his political base.”

To be sure, Barr is his own man with a solid career in the law.  Moreover, he seems to enjoy a genuine rapport with Trump.  In May 2017, for example, he wrote an op-ed in praise of the decision to fire FBI director James Comey, and later criticized the Democratic tilt of some members of special counsel Robert Mueller’s prosecutorial team.

Yet still, it’s interesting that Trump chose this moment to put a Bushie in a top job.

And so even amidst all the current good feeling about Bush 41—who was, after all, a war hero and a president of consequence—it’s worth recalling the mistakes that Bush made, in the hope that Trump won’t even think of repeating them.

As many will remember, the centerpiece of Bush’s 1988 presidential campaign was his pledge not to raise taxes.  As the candidate declared so memorably at the Republican convention in New Orleans on August 18, 1988: “Read my lips: No new taxes.”

That November, Bush carried 40 states, including California, Illinois, and New Jersey.  In fact, he won 426 electoral votes—the last presidential candidate, in either party, to go over 400.  So we can see: The Bush ’88 political model, built on the sturdy framework left behind by Ronald Reagan, was an obvious winner. 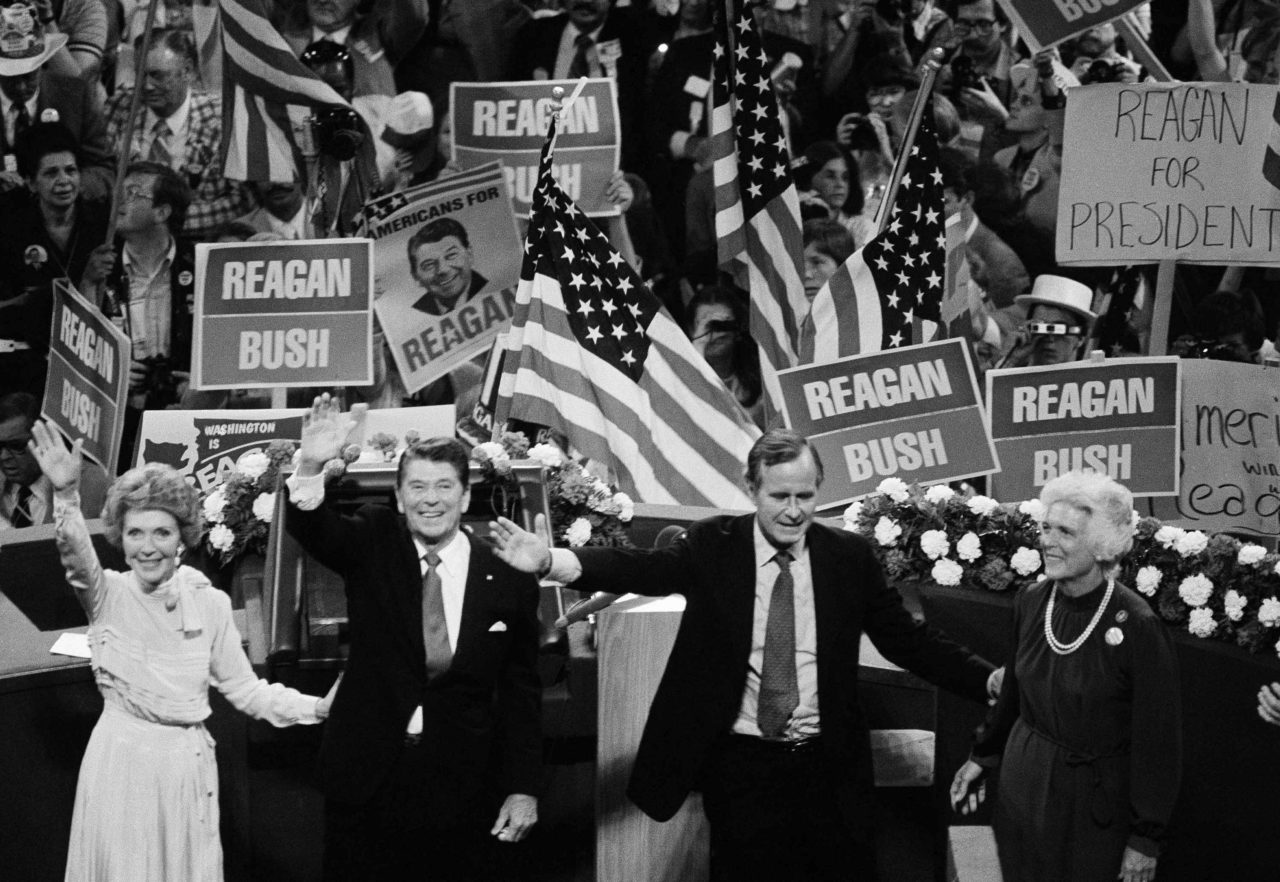 Yet there was a problem: Bush didn’t particularly believe in his own triumphant message.  Back in 1980, when he was campaigning as a moderate establishmentarian against Reagan, he had derided the Gipper’s tax-cutting approach as “voodoo economics.”  To be sure, Bush formally took back those words, but he never seemed truly to change his assessment.  In this sense, he was much closer to the “root canal” tax-increase approach of Bob Dole than to the “supply side” tax-cut philosophy of Reagan, or Jack Kemp and Newt Gingrich.

So once in the White House in 1989, Bush, joined by his conniving budget aide, Richard Darman (himself a certified swamp-dweller) chose to drift away from the hold-the-line-on-taxes mantra of the ’88 campaign.  Indeed, in Spring 1990, less than two years after he made his famous pledge, Bush changed his tune altogether.  His White House announced that the president was open, after all, to a tax increase, as part of a comprehensive deal on the budget.   The hope was that an increase, plus budget cuts, would close the budget deficit.

At this point the Democrats, then in control of both houses of Congress, jumped in to “negotiate” with Bush and Darman.  The Democrats’ idea of negotiation, of course, was to make the tax increases bigger, and the spending cuts smaller—or even non-existent.  And yet because Bush had already broken his pledge, he had little negotiating leverage.  And so when the deal was finally enacted in October 1990, it was real tax hikes, plus phony budget cuts.

Not surprisingly, grassroots Republicans—the folks who had voted for Bush—were demoralized, even as Democrats were, of course, energized.

So while the negative impact of Bush’s fiasco was cloaked for a time under the good feeling of Operation Desert Storm in early 1991, by the end of that year, it was obvious that Bush was, as he once said, in “deep doo doo.”

On December 10, 1991, conservative pundit Pat Buchanan announced that he would challenge the incumbent president in the upcoming Republican primaries.  Buchanan won an impressive 37 percent of the vote in New Hampshire a few months later, but then faded.  (His greatest impact, of course, would come later; his advocacy of a “conservatism of the heart”—focused on trade protections, immigration restrictions, and fewer military interventions—can be seen as an overture to the 2016 Trump campaign.) 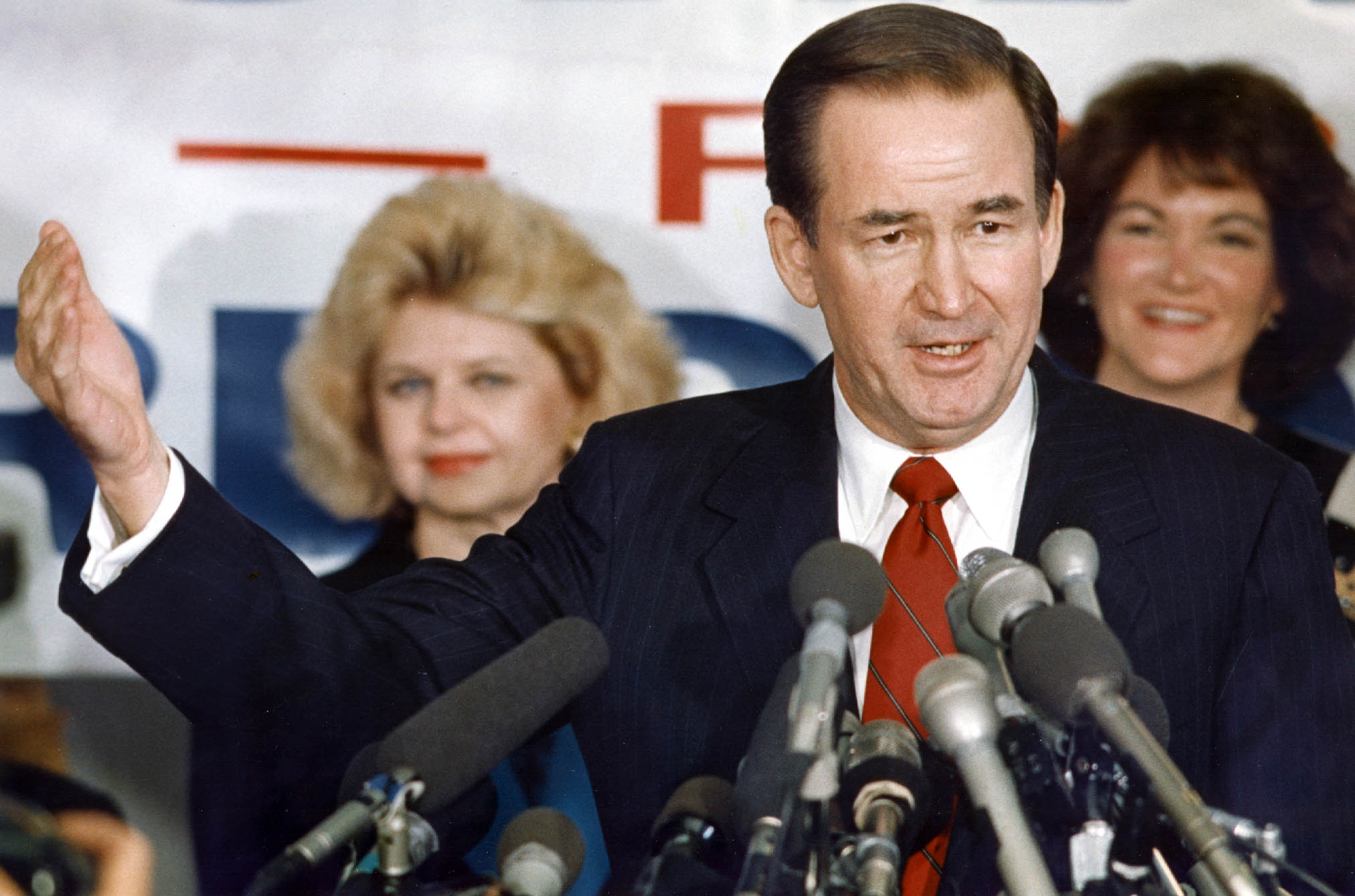 Yet even with Buchanan out of the way, Bush’s path to re-election was rocky and uphill.  Businessman Ross Perot soon entered the ’92 race as an independent, saying, in effect, that incumbent politicians were all liars.   Given the read-my-lips disaster, Perot’s campaign seemed most aimed at Bush; indeed, the election results showed that Perot did more damage to Bush than to the other candidate in the race, Bill Clinton—hardly known, to be sure, as a truth-teller.

Of course, Clinton won the 1992 election in an electoral college landslide.  Indeed, for Bush, it was the steepest slide in an incumbent president’s share of the popular vote since Herbert Hoover’s collapse in 1932.

Not surprisingly, the media, which once praised Bush’s tax increase, were no help to him in his re-election bid.  Yes, he had played ball with the Democrats when he broke his word, but he was, of course, still a Republican.  Indeed, a post-election study found that only 29 percent of campaign news stories about Bush were positive, compared to 52 percent for Clinton.

So that was the end of Bush 41.  He trusted the wrong people in Washington, and so as a result was distrusted by his own onetime supporters.  It was just another instance of a politician’s being seduced by his opponents, thereby abandoning his friends—and being left with nothing but ashes.

Fast-forwarding to today, here’s something interesting—and perhaps ominous: The Bush family has always defended 41’s tax increase.  Yes, other Bush politicos—including George W. Bush—have charted their own courses on taxation, but they’ve all doggedly defended 41’s “courage.”  For the Bushes, at least, blood is thicker than belief.

Thus it was revealing that one of the eulogists at Bush 41’s service in Washington was a major player in the 1990 tax debacle.  That would be former senator Alan Simpson, Republican of Wyoming, who back then was the Republican whip, the number two GOPer in the Senate.

In his eulogy, Simpson discussed the budget deal at length, spinning it as a stroke of genius: “Congressional participants drafted a remarkable bill that dealt with two-year budgeting, entitlement reform, comprehensive and catastrophic healthcare, Social Security solvency, and much more.”  Simpson then added, “But it required a critical ingredient called ‘revenue,’ translated into the word ‘taxes,’ translated into the words ‘read my lips.’”  In other words, in Simpson’s telling, the pledge-breaking was worthy, meritorious—and perhaps worth repeating.

It seems a safe bet that Simpson wouldn’t have raised the tax topic if the Bush family hadn’t wanted him to.   And so we can see: In 2018, the Bush family is still happy with the legend of 41, the brave man who did the right thing by raising taxes.

And of course, these days, with the 1992 election now far back in the rearview mirror, the MSM is happy to play along: Yes, yes, Bush was a statesman for raising taxes.  Today’s Republicans, take note!

All this opportunistic praising from the media was too much for Rush Limbaugh.  On December 6, the radio talker mocked as “phony” the media’s “fawning and talking about how [Bush] was so great.”  Limbaugh snorted, “They never treated him this way when he was President; they were vicious to him, like they are vicious and partisan to every Republican.”

Then Limbaugh got to the real point: The praise for Bush was done as a “contrast to what they think Trump is.”  That is, the MSM are building up Bush to tear down Trump—or perhaps, more sneakily, reporters are trying to lure Trump into imitating Bush’s catastrophic “statesmanship.”

Yet Team Trump should always realize: It’s one thing to admire Bush 41, the man.  It’s quite another to get sweet-talked into repeating Bush 41 big mistake.

So in all his dealings with Congress, the 45th president should always bear in mind that if the MSM is praising him, he’s probably edging into the danger zone.