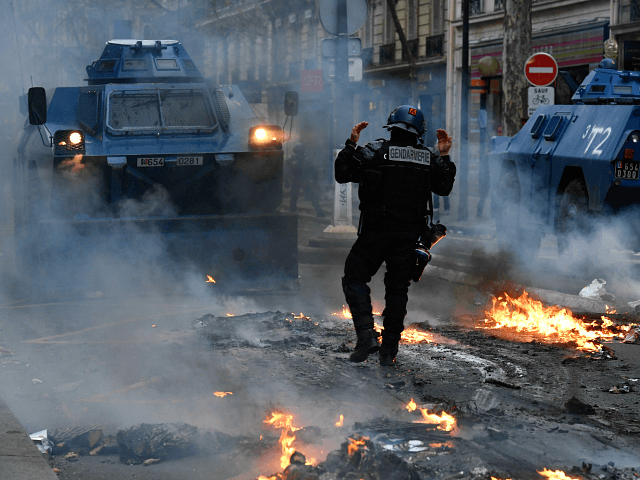 Pictures and video of an armoured personnel carrier emblazoned with the European Union flag helping to crush Gilet Jaunes protesters in Paris have gone viral on social media, with many suggesting it shows what might be in store for Europe once the bloc gets the unified army it is planning.

Tens of thousands of regular and paramilitary police were deployed in the French capital to defend Emmanuel Macron’s presidential palace and confront protesters as the worker-driven “Yellow Jackets” or “Yellow Vests” commenced “Act IV” of their mass protests against the globalist leader, with an astonishing 1,400 people arrested across the country.

Baton charges, stun grenades, and tear gas have been a regular feature of the protests since they began four weeks ago — with an 80-year-old woman actually being killed when an errant gas cannister flew into her apartment and hit her in the face last week — but the December 8th protests marked the first time the authorities deployed military-style armoured vehicles against the people.

Images and video of at least one of the APCs thundering down the Champs-Elysees with the European Union flag emblazoned on its hull were shared widely on social media sites such as Facebook and Twitter, causing considerable alarm — particularly among people who are already concerned about the EU’s ambitions to establish a common army, border force, and gendarmerie (paramilitary police) force.

I don’t think people realise how profoundly concerning this is: it isn’t just the symbolism; it’s the EU contra the #GiletsJeunes #YellowJackets #YellowVests; the European Union against the French people. ‘Those who cannot remember the past are condemned to repeat it.’ https://t.co/biJ6Tc05rU

“I don’t think people realise how profoundly concerning this is: it isn’t just the symbolism; it’s the EU contra the [Yellow Vests]; the European Union against the French people,” cautioned Adrian Hilton, a British academic and former adviser to leading Tory politician Michael Gove.

“Those who cannot remember the past are condemned to repeat it,” he warned, paraphrasing Spanish-American philosopher George Santayana’s famous aphorism.

“My goodness! What have we all become as a result of the EU?” asked one Twitter user rhetorically. “Very, very discontented people.”

“It’s terrible optics,” chimed in another. “[S]ending in anti-riot police with EU flags instead of French ones on them just sends out the message that France’s own authorities are against the French people.”

“[The EU is] nowhere near a ‘project for peace’,” asserted a third.

The EU flag on the APC may have denoted participation in the European Gendarmerie Force (EGF/EUROGENDFOR) — an embryonic Europe-wide paramilitary police force which, like the Eurocorps military force often seen raising the EU flag outside the European Parliament building, is not technically an EU organisation, but often involved in EU projects.

The organisation had not responded to a request for confirmation by the time this article was published.

Brussels police blocking protesters from getting close to the European institutions#GiletsJaunes #Bruxelles pic.twitter.com/zuJz60F4nv

Footage from sympathy protests in Brussels, Belgium, also showed police lined up at barricades with batons drawn and water cannons behind them, to keep Yellow Vests away from the European Union’s headquarters buildings.

Another video showed police blocking the path of a small knot of demonstrators who had reached an entrance to the European Parliament, hitting them with pepper spray when they came too close.