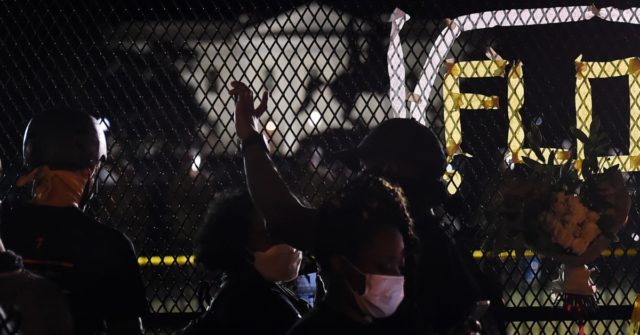 Violent protesters tried and failed to topple the newly constructed barriers at the White House on Tuesday night.

A couple of hundred protesters gathered outside the eight-foot-high fence late at night and early Wednesday morning, some grabbing it and rocking it back and forth, according to a video filmed by reporters and posted on social media.

In response, a line of law enforcement officials inside Lafayette Park approached the fence, some firing pepper spray to subdue their attempts.

Some protesters threw water bottles and other objects at the officers who at times returned fire with pepper spray.

The city was largely quiet by the end of the night. There were no signs of widespread rioting and looting after large crowds of protesters gathered earlier in the evening.

Although some people spotted low-flying helicopters in the area, it was not at the heightened level of force demonstrated on Monday night in Washington, DC.

Police vs protesters. As you can see police are firing what I assume are rubber bullets, protesters throwing bottles. pic.twitter.com/5EJ6fhSODP