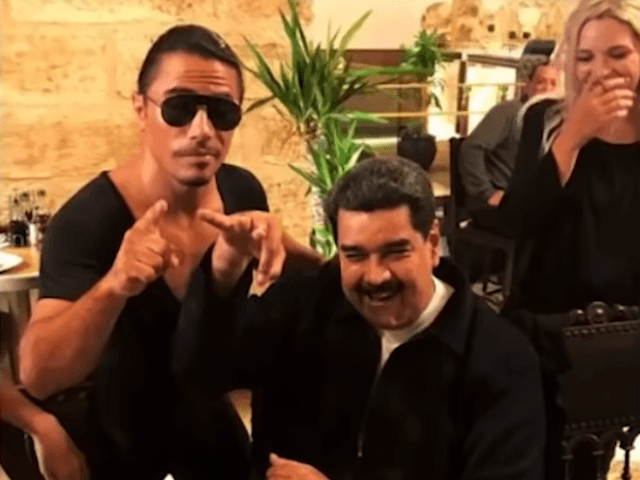 The Turkish chef Nusret Gökçe, known popularly as “Salt Bae” after a photo of him sprinkling salt went viral in 2o17, has triggered international outrage after hosting Venezuelan dictator Nicolás Maduro and his wife, Cilia Flores, for a lavish feast on Monday and posting the videos online.

Gökçe previously courted the ire of victims of communism around the world by posing with a beret and cigar in honor of Cuban dictator Fidel Castro shortly after the latter’s death in 2016. That photo made headlines after Cuban Americans shared it on social media following the popularization of the “Salt Bae” meme a year later.

Maduro, widely mocked for his portly figure, is the illegitimate socialist ruler of a nation in which at least 15 percent of the population relies on eating garbage to survive and nearly 90 percent of the population say they struggle to afford three meals a day. Venezuela has also nearly run out of every medical supply the World Health Organization (WHO) lists as necessary to run a functional healthcare system.

Gökçe posted a series of videos on Twitter and Instagram on Monday evening showing Maduro and Flores enjoying a meal personally served by the celebrity chef at Nusr-Et Steakhouse in Istanbul, Turkey. “Salt Bae” has since deleted the posts, though they have made the rounds in global media and are still widely available. As of press time, he has not commented on the videos or the backlash against his display since deleting the footage:

At the end of the meal, Gökçe gifted Maduro with a shirt imprinted with the image that became known as “Salt Bae” on the Internet. Maduro also appeared to be enjoying a cigar given to him in a personalized cigar box following the feast.

In a deleted tweet, Gökçe wrote, “I would like to Thank the presindent [sic] of Venezuela Nicolas Maduro for visiting!”

Maduro acknowledged the meal on television during a broadcast following his return to Venezuela, describing Gökçe as “a very pleasant and happy man.” Maduro also claimed that Turkish authorities invited him to eat at the restaurant, implying it would have been rude of him to decline the invitation. The dictator claimed he was in Turkey for two hours waiting for a connecting flight on his way home from Beijing, where he secured billions in loans from Communist Party leader Xi Jinping, which Venezuela cannot afford.

Maduro has established increasingly close relations with Turkish President Recep Tayyip Erdogan, attending his most recent inauguration and extending support for his growing crackdown on free speech in the country. Erdogan has, in turn, invited Maduro to major international events, such as summits of the Organization of Islamic Cooperation, despite Venezuela playing no relevant role in that organization:

The Venezuelan diaspora and its allies have reacted to the images with disgust. An international dissident group known as Venezuelans Persecuted Politically in Exile (VEPPEX) has organized a protest scheduled for Wednesday at noon in front of Nusr-et Steakhouse in Miami, Florida, and against Gökçe personally for being an “admirer of the dictators of Venezuela and Cuba”:

Sen. Marco Rubio (R-FL), who represents the state Gökçe profits in, referred to the chef as a “weirdo” on Twitter and posted the location and phone number for his Miami restaurant in case some of his constituents “wanted to call”:

This guy @nusr_ett who admires dictator @NicolasMaduro so much actually owns a steakhouse in, of all places, #Miami. It’s called NUSR-ET STEAKHOUSE MIAMI located at 999 Brickell Avenue, Miami, FL 33131
The phone number is 1 305 415 9990 in case anyone wanted to call. https://t.co/7CDkgHVZWh

Others have mocked the video. In a meme circulating in south Florida, home to a large Venezuela exile community, some joked that a server tending to Maduro was the reincarnation of Cuban founding father José Martí, “back from the great beyond to poison Maduro.”