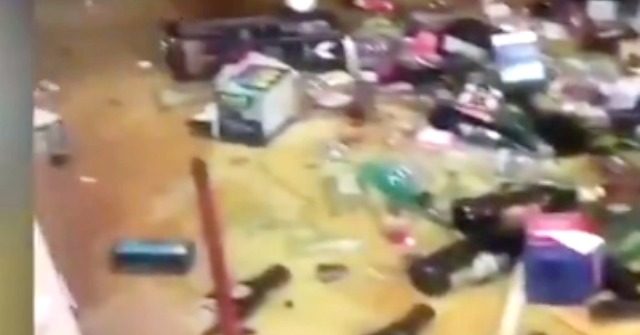 A 6.4-magnitude earthquake shook Southern California on Thursday morning in the Mojave Desert about 120 miles from Los Angeles, according the U.S. Geological Survey.

The earthquake struck at 10:33 a.m. PDT, 11 miles northeast from Ridgecrest and 62 miles northwest of Barstow, the USGS reported. It was 6.6 miles below the surface in the Searles Valley, a remote area of Kern County. It was felt as far away as Long Beach and Las Vegas, the Los Angeles Times reported.

Footage of the moment the earthquake struck is circulating on social media.

EARTHQUAKE! Took this video 10 seconds after. My chandeliers are still shaking! pic.twitter.com/Ta72ZgbgPd

Earthquake short video from our home security cameras this morning. Watch the lamp and wooden photo on the table. @MrsScottBaio #earthquake pic.twitter.com/ASdJ7MNcfy

Buildings shook in Los Angeles after a magnitude-6.4 #earthquake hit near the area of Ridgecrest in Southern California on #July4th pic.twitter.com/z7pnkxKCAc

Wow.
Take a look at the extensive damage to this Ridgecrest liquor store following a powerful M6.4 earthquake >>> https://t.co/FQEa47DDpC pic.twitter.com/cvZiIrJJhy

Wow! A guest at The Venetian in Las Vegas shared this video of the shaking they say because of the #earthquake: https://t.co/GGfL41Jph0 pic.twitter.com/jZLO0uaW1A

More pictures from my cousin who lives in Ridgecrest after a 6.4 magnitude #earthquake shook southern CA near Searles Valley. Her dresser drawers were shaken open. She says her power is out. pic.twitter.com/lgYGtYBjfw

The earthquake was the largest to hit Southern California since 1994, when a 6.7-magnitude quake hit the San Fernando Valley.

Structure fires were reported in nearby Ridgecrest along with damage to roads, but no injuries were immediately reported. Officials warned of the possibility of strong aftershocks.

The Los Angeles Fire Department acknowledged the temblor on Twitter, asking residents not to call 911 “unless there are injuries or other dangerous questions.”

The Los Angeles Police Department said on Twitter that the department didn’t receive any reports of damage, adding that “This was a strong one and a good reminder to be prepared.”

The United International Press contributed to this report.