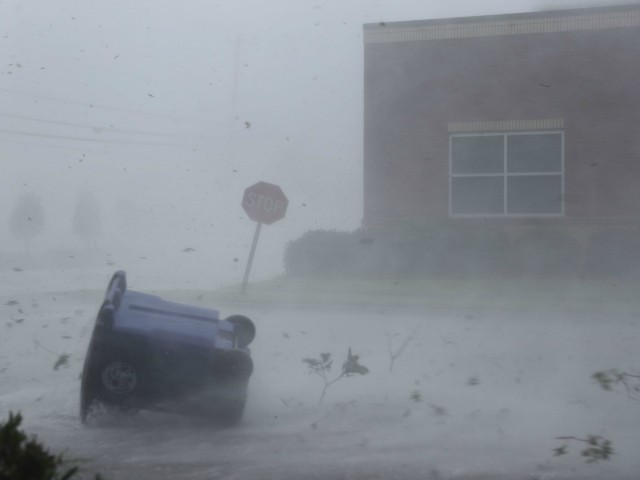 Wind already taking roofs off of buildings as Hurricane Michael bears down on the panhandle. pic.twitter.com/c0RgNA8C6D

This is crazy. This is Hurricane Michael in Panama City, FL. #HurricaneMichael pic.twitter.com/6QtY3uAR2k

These are by far the worst conditions we’ve experienced in Panama City Beach #HurricaneMichael #11Alive pic.twitter.com/OKYTKGdSXb

Hard to see – but this is shot through the window of the building we’re in. The hotel sign just fell off the top, and a McDonalds M has just taken flight too #HurricanMichael #panamacity pic.twitter.com/CErNkbzBCF

Cantore nearly just got speared by 2×4 it seemed. #HurricaneMichael pic.twitter.com/tyNWrymC3p

#BREAKING on @ABC7: New images of #HurricaneMichael and its power. I would not want to be in Panama City, FL right now. Wishing those who did not evacuate the best of luck. Video Courtesy: Martin Herrera/WatherNation #Michael #Evacuation #severeweather pic.twitter.com/w6QUt6XpIZ

@CJohnFranklin is in Florida, where Hurricane Michael is currently hitting the coast as a category 4 storm pic.twitter.com/GmEZLNEp7j

“We are experiencing some pretty intense winds.”@ABC meteorologist @RobMarciano is knocked back by a powerful wind gust while reporting on #HurricaneMichael in Panama City, Florida. https://t.co/uKgG5vzs83 pic.twitter.com/AcLLGBtZ57

WATCH: Facing powerful Hurricane Michael winds, @LesterHoltNBC and his news crew move a Panama City hotel mattress to cover their window: “We want to be on the air, but we’ve got to take care of each other.” pic.twitter.com/06O4pFYzXc

A whole house was ripped apart in #Mexico Beach, #Florida. Here is video of parts of the home washing up to other properties. This is one powerful storm. #HurricaneMichael. (via Talarico Tessa) #Hurricane #mexicobeach pic.twitter.com/BBlzMm4Au2

Hurricane Michael made landfall Wednesday afternoon near Mexico Beach, Florida, as a Category 4 storm with 155 mph winds, according to the Associated Press. “Hurricane Michael has made landfall, and we are continuing to prepare rapid response efforts. We have trucks loaded with tons of food, water, and other critical supplies ready to move in- including 1.5 million Meals Ready-to-Eat and 1 million gallons of water,” Florida Gov. Rick Scott said in a statement shortly after the storm made landfall.

Earlier Wednesday, Federal Emergency Management Agency (FEMA) administrator Brock Long warned Florida Panhandle residents that Michael is a “hurricane of the worst kind” and said 3,000 FEMA employees are ready to assist those impacted by the storm in Florida and Georgia. “The citizens in Georgia need to wake up and pay attention,” he said during a press conference. ”Bottom line is this storm will be the worst storm Southwest and Central Georgia has seen in many decades, if not the worse storm.”