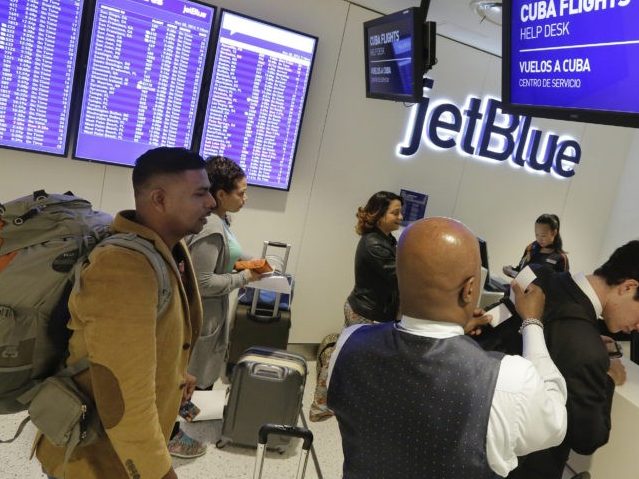 An irate woman had a complete meltdown when she found out she could not board her flight out of a Florida airport, jumping on a counter and yelling the word “racist” at a JetBlue employee, according to a video posted Monday on Instagram.

The viral video, shot by singer Post Malone’s manager Dre London, shows the unidentified passenger screaming “racist” at a JetBlue employee working the counter at Fort Lauderdale-Hollywood International Airport while throwing her body onto the counter by the gate.

“Who does that to a woman like me? Get me out of here!” she yells.

At one point during her tirade, she reportedly yelled, “I’m racist against white people, I f***ing hate white cops.”

The distressed passenger was with a group of travelers stranded at the airport for up to 20 hours because of technical difficulties with a plane, forcing airline employees to delay the flight until a replacement aircraft reached the airport, Yahoo News reported.

Despite the passenger’s meltdown over not being able to board her flight, airline personnel prohibited her from boarding her flight and called local law enforcement to remove her for being disruptive.

A representative for JetBlue said in a statement that the customer in the video was scheduled to depart on a flight without major delays, but officials did not let her board the flight because she appeared to be intoxicated.

“On January 6, crew members at Fort Lauderdale-Hollywood International Airport requested assistance from local law enforcement after a customer was denied boarding for indications of intoxication and became disruptive,” the representative for the airline said.

The Broward County Sheriff’s Office confirmed that the passenger, who was from California, was taken to a hospital for a psychiatric evaluation.