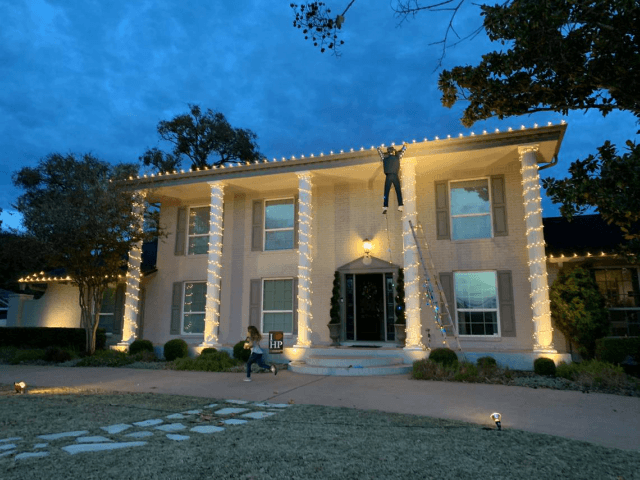 A Texas homeowner who recreated a scene out of the Chevy Chase film National Lampoon’s Christmas Vacation outside his home caused chaos when a man thought a dummy hanging from a roof was a real person.

The Heerlein family replicated the scene in the holiday classic where the main character, Clark Griswold, dangles from a roof in his attempt to hang Christmas lights on his house.

The family purchased a dummy and dressed it up in a Clark Griswold mask and clothes from Goodwill to match the outfit Chevy Chase wore in the movie.

Chris Heerlein suspended the dummy from the roof of his house and placed a ladder underneath the dummy to make it appear as if the ladder had tipped over.

Heerlein had planned to win the neighborhood’s holiday decorations contest. But instead of winning a prize, people in the area called the authorities in a panic.

Surveillance footage from the home’s security camera showed a man rushing towards the dummy, thinking it was a real person, in an attempt to save it.

“He was doing everything he could to get the ladder! And be like ‘Save Clark!’” Heerlein’s sister-in-law Leah Wheless told KVUE. “He didn’t give up. Whatever he had to do, he was going to save old Clark Griswold.” This prompted the homeowners to put up a sign that reads, “Clark G is part of our Christmas display please do not call 911.”

Even though the incident caused chaos, the family felt bad about the reaction and wanted to thank the person who expressed concern.

“We’d love to be able to find him and reach out. We have a very special gift that we would like to give him and we’d like to tell him thank you,” Wheless said.

The Good Samaritan, a retired veteran by the name of Alfred, took it all in stride once he realized the display was not real.

“I was trying to get him down any way I can. Except when I started talking to him, he never said nothing!” Alfred said. “Then I thought, ‘Oh my God I hope he’s not dead, lemme call 911.’”

Other families who have tried to recreate the Christmas Vacation scene have also fooled neighbors into thinking the man in the display was a real person.

In 2017, a Colorado man’s holiday display recreating the Griswold scene scared his neighbors enough for them to call 911.