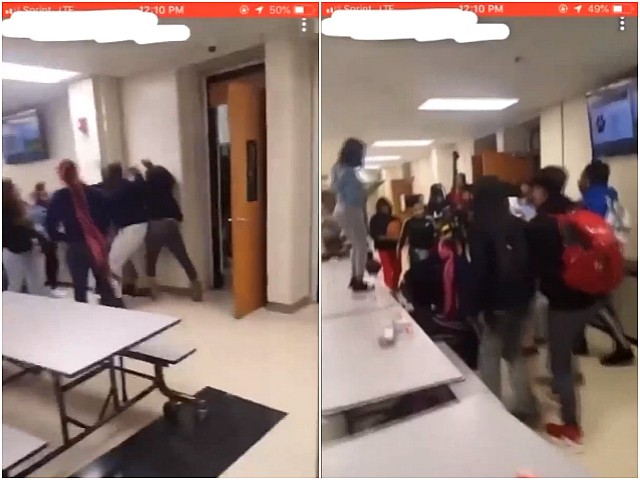 Students dragged, kicked, and beat a Missouri high school assistant principal to the ground for trying to break up a fight, according to a video posted Tuesday.

The video, obtained by KTVI, showed the teenagers repeatedly kicking Oakville High School Vice Principal Brian Brennan to the ground for intervening in a brawl while other students watching the scuffle laughed and clapped in the background.

Some teens filmed the brawl, which took place in the cafeteria of the St. Louis high school, and posted the footage on Snapchat instead of calling for help. The video was shared thousands of times and went viral on the social media platform.

Authorities arrested three students — one 15-year-old and two 16-year-olds — allegedly involved in the confrontation. Although the students were taken into custody, they will not be charged because of their age. Authorities then turned over the case to St. Louis County Family Court. The students involved, however, may face expulsion from school.

The Mehlville School District released a statement Wednesday noting that school administrators broke up the fight and all “staff and students” are okay.

“Several administrators intervened and broke up the fight. We understand that video of the fight has been shared on social media, and we’ve received several calls checking on the welfare of our staff and students,” the Mehlville School District said in a statement.

“All of our staff and students are OK. We are investigating the matter, and discipline will be rendered as detailed in our district disciplinary policy,” the statement continued.