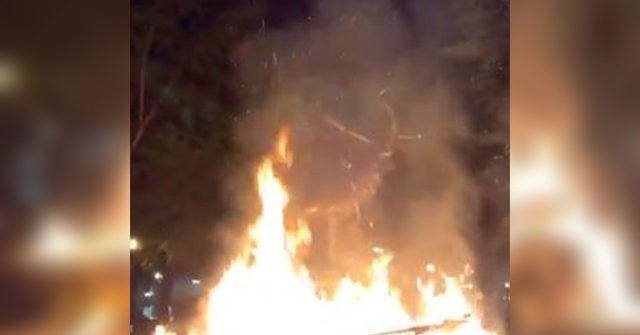 The rioters also tore off wood boards protecting the courthouse’s windows and used them for firewood and barricades, according to Fox News.

“Protesters threw water bottles and other projectiles as police fired pepper balls and at least one flash-bang at protesters in front of the courthouse, according to freelance reporter Sergio Olmos,” the article noted.

The Thompson Elk Fountain was placed in the middle of SW Main Street between 3rd and 4th Avenues in 1900, according to Vintage Portland, a project of the Portland Archives and Records Center (PARC).

“The statue was presented to the city by David P. Thompson, a former Portland mayor and civic leader,” the site read.

In an update Wednesday, the Portland Police Bureau shared a list of suspects arrested during demonstrations and riots that took place from Tuesday until Wednesday night.

“5 Officers and 1 Criminalist sustained injuries during the events last nights, including some from thrown rocks and full beverage cans,” the bureau noted, citing photos of the projectiles shared on its Twitter page:

Officers had experienced weeks of demonstrations that almost nightly turned into unlawful assemblies, civil disturbances, and riots, according to Chief Chuck Lovell.

We have had law enforcement facilities and personnel targeted with violence, including the barricading and burning of an occupied police facility on more than one occasion. Last night, another march occurred, this time in a residential neighborhood where many families were at home and some were likely sleeping.

Some have said we are only protecting an empty building and the force used was excessive. My response to that is we would have seen one building lit on fire in a neighborhood where a commercial building fire could have led to residences being burned with families inside.

“Life safety for all is our number one priority. We are determined to protect our community. This is bigger than property; it is about human lives,” Lovell concluded.