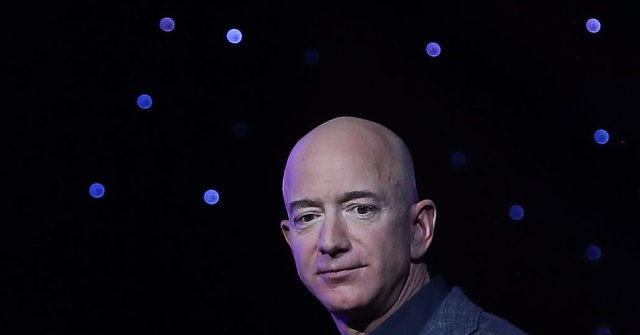 “Protesters rallied at Will Rogers Memorial Park in Beverly Hills, then marched to the gates of Bezos’ home, carrying signs and chanting ‘Tax Bezos,’” according to the Los Angeles Times.

A group called the Congress of Essential Workers (T.C.O.E.W.) sponsored the event that was led by its founder, Chris Smalls, a former Amazon warehouse manager.

The organizer’s list of demands included that the company provide employees with adequate protective equipment, cleaning supplies, and increase wages by $2 an hour for hazard pay, the Times article read.

Smalls was fired from Amazon in March “shortly after he helped organize a work stoppage at the company’s warehouse to protest what he called a lack of protective gear and hazard pay for employees,” according to Patch.com.

Amazon said it fired him for “violating social distancing guidelines and putting the safety of others at risk,” the outlet stated.

T.C.O.E.W. dubbed Sunday’s protest The Wrong Amazon Is Burning! and described it as a “solidarity march to demand labor + climate justice,” according to its Twitter page.

The group called itself, “A secure, collaborative network of essential workers and allies fighting for the elimination of billionaires, wealth redistribution, and protecting the working class from exploitative CEOs like Jeff Bezos.”

Amazon has faced pressure from lawmakers and labor groups to release data on coronavirus infections among its workforce following several reports of unsafe working conditions. The company implemented regular temperature checks and began offering workers basic PPE following pressure from both the Senate and House of Representatives.

Andrew Lewis of the North Westwood Neighborhood Council was one of about 100 people who attended the protest on Sunday.

“Amazon is far and beyond the wealthiest corporation on the planet,” he told the Times, adding, “They have the resources to keep their employees safe and healthy, and actively choose not to.”