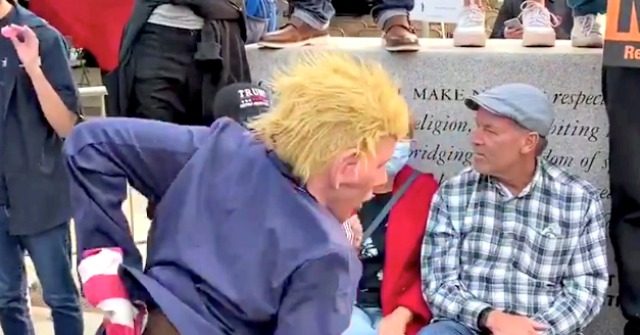 Demonstrators, one of whom donned a Trump mask and ran the American flag through her underwear in a purported act of protest in front of the president’s supporters, gathered in Philadelphia to protest President Trump’s arrival in the city for a town hall event.

Footage shows the protester in a Trump mask, blazer, and pink underwear in the midst of a group of both Trump supporters and opposers, stuffing the American flag into her underwear, the Daily Caller’s Shelby Talcott, who is on the scene in the city, reported:

A woman in a Trump mask stands in front of some pro-Trump protesters and runs the American flag through the inside of her underwear: pic.twitter.com/cpZo5d6uT0

Footage shows a mixture of supporters of the president and protesters. Officers are on the scene and reportedly attempting to separate the groups to minimize the chance of conflict:

As more people arrive, police seem to be trying to move the pro-Trump protesters behind a barricade to separate the groups. It’s around 5:15pm here in Philly. pic.twitter.com/Kp1xqdDEUH

More people continue to arrive, it’s a little after 6pm in PA: pic.twitter.com/B8PYASf0rs

There’s a lot of yelling, insults, cursing, some bullhorns and plenty of middle fingers extended. But I’ve seen a couple of conversations/debates that looked polite and engaging. pic.twitter.com/wZhZak2iPM

According to the Philadelphia Inquirer, protesters, who gathered outside the National Constitution Center, outnumbered Trump supporters and held signs reading “No to fascism.” They engaged in a series of chants, including, “We will not stop until they are gone” and “Trump Pence out now”:

A group of ~40 protesters have gathered along Market Street, across Independence Mall from the National Constitution Center, where President Trump is scheduled to participate in a town hall for undecided voters tonight.

The opposing groups exchanged unpleasantries — one demonstrator, wearing a pig mask, approached a Trump supporter and told her that she should be wearing a mask — but no physical confrontations were immediately reported. Chants of “four more years” alternated with “Black lives matter.”

The Inquirer also reported that officers attempted to separate the opposing groups.