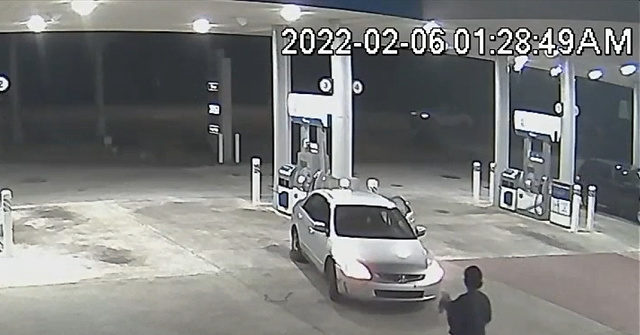 Shocking surveillance footage caught the moment a reportedly pregnant woman was run over by her own car during a carjacking in Alabama.

The incident occurred on February 6 at approximately 1:28 a.m. at a Chevron on Azalea Road in Mobile, according to WKRG. The woman had entered the Chevron to purchase a drink, and on her way out, she saw a man sitting in her car, WALA reports.

The video shows the victim opening her diver’s side door as the suspect begins driving, and he manages to close it before hitting a vehicle in an adjacent parking spot. The woman then opens the back door as the suspect speeds in reverse, getting away from the woman. The victim then stands in front of the vehicle before the suspect plows through her, sending her onto the hood and slamming her to the ground. The suspect fled and was still at large as of Tuesday, WKRG reports.

Mobile police told the outlet that the woman was okay on the scene, though she reported suffering from back pain. An employee at the gas station said the woman is a regular customer and pregnant. It is unclear what the condition of her unborn child is.

“Heart dropping that somebody would willingly run over a pregnant woman just to steal her car,” an employee at the Chevron said.

Employees say the incident did not surprise them and added that they want a more substantial police presence in the area, WKRG reports.

“Besides just that, wondering if someone is going to flash a gun because I ask for ID,” an employee said. “There’s no honest people anymore. There’s no decency to each other. There’s no common sense. It’s becoming disgusting.”

An attempted carjacking occurred at the same gas station last August. A woman was picked up and thrown to the ground by alleged suspect Brandon Young, 28, WKRG previously reported. The suspect did not get away with the vehicle, though he fled the scene. Young was charged with third-degree robbery, according to the outlet.