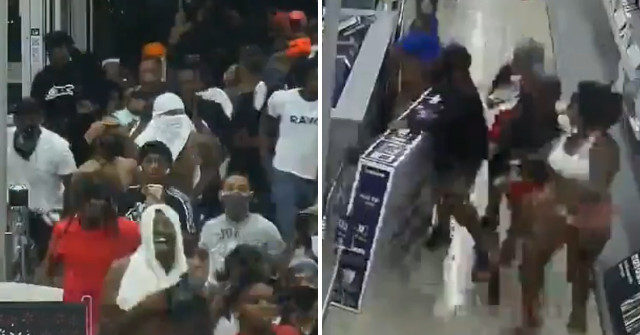 Roughly 200 looters stole over $100,000 worth of products from a Tampa, Florida, Walmart on the evening of May 30, according to local law enforcement.

The Hillsborough County Sheriff’s Office is asking for assistance in identifying the looters, who raided the Walmart Supercenter on East Fletcher Avenue shortly after 9:00 p.m. local time.

DO YOU KNOW THEM? The Hillsborough County Sheriff’s Office is asking for help identifying approximately 200 looters who broke into a Tampa Walmart and stole more than $100,000 worth of merchandise. DETAILS: https://t.co/p0nEI0LwPb pic.twitter.com/lxKFhDTodM

The store was closed due to the police brutality protests occurring outside the University Mall, but people wielding blunt objects like hammers broke the glass entrance doors and stormed into the store.

Footage released by the sheriff’s office shows wave after wave of looters streaming through the front door — past the social-distancing reminders — and ransacking the store’s electronics section, hauling away computers, TVs, and more.

After reviewing the video, detectives believe somewhere around 200 people participated. An estimated $116,000 in merchandise and damages was reported.

“Not only is this violence completely unacceptable, it was disrespectful to the protesters who were out there that night trying to express their message in an impactful way,” Sheriff Chad Chronister said in a statement. “We are actively working to identify each and every one of these suspects and ask the public to provide any information they may have.”

Looting sprees have occurred across the country in the wake of the death of George Floyd, a black man who died while in police custody in Minneapolis. Looting hotspots include New York City, Los Angeles, and St. Paul. Last week, prosecutors in Austin, Texas, charged three individuals linked to Antifa with looting a Target store.