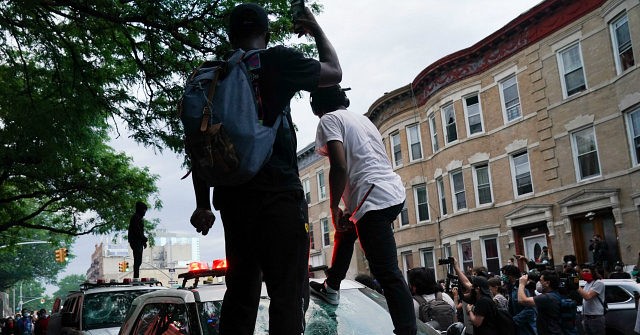 The video was published during ongoing unrest and lawlessness in parts of New York City, NY, following the death of George Floyd. The NYPD officer is seen being assaulted by several men.

NYPD Cop attacked in the Bronx. I guess the critics will now say he overreacted. NYPD Cops defend yourselves, you are alone! pic.twitter.com/424w5bZbC6

Breitbart News reported on the meanings of “Fuck 12” and “ACAB” — messages shouted and shared through graffiti by Black Lives Matter protesters, rioters, and vandals.

Urbandictionary.com explains the meaning of “Fuck 12”:

Fox News Channel’s Bryan Llenas shared two videos on Monday related to unrest in New York City, one capturing part of an arrest in progress and another of an injured NYPD officer.

Looters being arrested and taken out of the Macy’s in Herald Square. pic.twitter.com/oLDOWhN89Q

NYPD officers arrest a looter who was vandalizing a store while other rioters wait outside. Dangerous situation here. pic.twitter.com/O6EncYfh5M