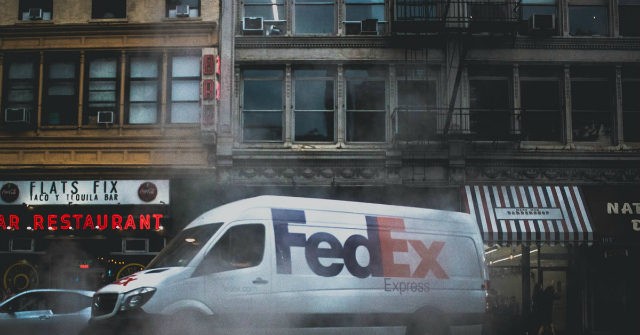 A man reportedly died on Saturday after being dragged by a FedEx truck in downtown St. Louis, Missouri, during a night of protests and riots.

Police said the incident occurred just after 3:00 a.m. near N. Broadway and O’Fallon, when protesters blocked off the street and surrounded the truck, according to KMOV.

Footage captured by bystander Jared Arms showed the moment, beginning at 26:56 in the video, when the group began banging on the truck’s windows:

“Back up! Back up!” one person could be heard yelling at the driver.

Moments later, the truck began to move forward, and a man caught between the trailer’s wheels was seen being dragged along the pavement as the semi-truck picked up speed.

“They dragging somebody!” A person behind the camera shouted, adding, “Stop this fucking truck!”

The vehicle did not stop and drove away through an intersection.

Later, police stated that the man was taken to a hospital, where he died.

“Police said early Saturday the circumstances of the incident were being investigated by the accident reconstruction team,” according to the St. Louis Post-Dispatch.

The report also noted that prior to the event, protesters started a fire in the street and allegedly broke into an Amazon Prime truck and the FedEx truck.

Video posted to Twitter by a user named “They Call Me Teddy” showed several people trying to pull the man out from under the vehicle as it left the scene.

“#riots2020 #Stl me and many others tried pulling him from under the truck. He was under the tire for at least a minute before the truck started driving. We didnt have enough strength #BlackLivesMatter,” he wrote:

#riots2020 #Stl me and many others tried pulling him from under the truck. He was under the tire for at least a minute before the truck started driving. We didnt have enough strength #BlackLivesMatter pic.twitter.com/Gz7uwXRBGd

“Police called for an ambulance after Floyd lost consciousness, and he died later at the medical facility where he was transported. The officers were responding to a report of forgery at a Minneapolis business,” according to Breitbart News.