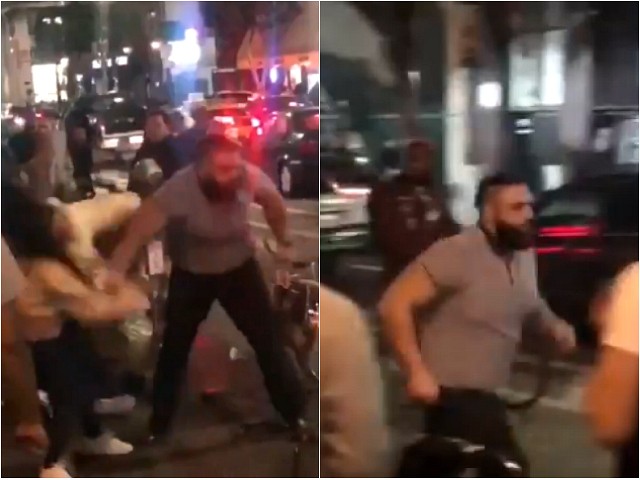 A California man caught on camera allegedly punching two women after getting into an argument with a Los Angeles hot dog vendor surrendered himself to authorities Tuesday night.

The Los Angeles Police Department (LAPD) tweeted a video of the suspect Tuesday, reportedly showing the suspect throwing several punches at two women before running away from the scene.

Attention Los Angeles — this guy brutally punched two women at a hotdog stand on Jan. 26 in the area of 6th & Spring. Someone knows him, and we would like to be one of those people. If you have any info contact Detective Gonzalez 213-996-1851 (after hours contact 213-486-6606). pic.twitter.com/DN1Og1lToM

The confrontation began after the victims allegedly overheard the suspect getting into an argument with a hot dog vendor over a $6 hot dog on January 26, Fox 11 LA reported.

A second hot dog vendor reportedly offered to give the suspect a free hot dog for his troubles, but that did not seem to diffuse the situation.

The women reportedly intervened, getting into a verbal argument with the suspect. The argument turned physical when the suspect allegedly punched both women in the face. The women appear to try to unsuccessfully fight back. Moments later, he fled the scene.

The LAPD’s video of the suspect went viral, gaining nearly two million views as of Tuesday evening. But the police department’s viral video had such a wide reach, it convinced the suspect to turn himself in.

Police arrested Arka Sangbarani Oroojian on Tuesday evening after he surrendered to authorities, charging him with one count of assault with a deadly weapon.

UPDATE: Arka Sangbarani Oroojian turned himself into police last night at LAPD Central Station and was booked for Assault with a Deadly Weapon. His bail has been set at $90,000. We thank the community for their help in spreading the message https://t.co/BBAlsdlqKq