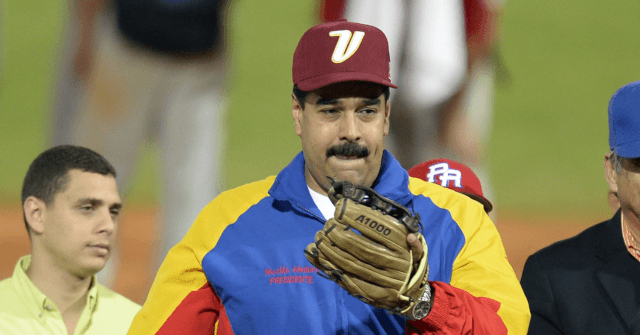 Venezuelan dictator Nicolás Maduro published a video on his Twitter account Monday of himself playing a “friendly” softball exhibition match between his senior cabinet members and soldiers loyal to his regime.

The video shows Maduro – boasting a significantly heartier body type than the average Venezuelan – running slowly around a baseball field and batting at some balls, later engaging in a call-and-response exercise with soldiers in which he yells “loyal, always!” and the soldiers reply “traitors, never!”

The softball match occurred on Sunday, nearly a month since legitimate Venezuelan President Juan Guaidó announced from an airbase near Caracas that Venezuela’s armed forces had agreed to abandon Maduro. While a handful of soldiers did defect from the Maduro regime, the nation’s defense minister, Vladimir Padrino López, and senior members of the military later issued statements of support for Maduro in public. Only the head of the secret police (Bolivarian Intelligence Agency, or SEBIN), Gen. Manuel Cristopher Figuera publicly abandoned Maduro.

Guaidó has failed to dislodge Maduro from the presidential palace since the attempted military uprising.

“Lovely softball match to ratify the civic-military union, our commitment to national peace,” Maduro wrote on Twitter. “Sports unite us and contribute to harvesting the great and wonderful for our beloved Venezuela.”

Venezuela’s state propaganda network, VTV, broadcast the match and explained that the friendly softball game occurred between the National Bolivarian Armed Forces (FANB) and Maduro’s “executive branch.” Maduro’s team, of course, won despite being made up of middle-aged politicians playing against soldiers, who must presumably remain physically fit to do their job. According to VTV, Maduro has “continued the tradition begun by Commander Hugo Chávez, who inaugurated the presence of a president for the first time in national political and sports history in sports activities.”

VTV called the spectacle “unthinkable a century ago.”

While sports are a new foray for Maduro, he has recently increased the number of public appearances in which he appears engaging in physical activity. Following the failed uprising, Maduro appeared on television jogging alongside Venezuelan troops, claiming to “prepare for the defense of the country” against the United States, which has made no moves outside of verbally expressing support for democracy against Maduro. Maduro later appeared on television dancing to a pro-socialist rapper to promote a government program called “Youth Gigs,” intended to distract young people from protesting the acute lack of food, water, medicine, electricity, and other needs by engaging them with government jobs. Maduro has used dancing for years to give the appearance on state television that his government is successful and not worried about the ongoing humanitarian crisis in the country, which it created and denies exists.

Maduro continued the party on Monday, the one-year anniversary of his alleged re-election. Scheduling presidential elections for May 20, Cuban Independence Day, Maduro banned non-communist opposition candidates and used the military and informal violent socialist gangs known as colectivos to threaten voters into supporting him. Despite the rampant illicit behavior, the 2018 elections saw record low turnout amid an opposition boycott. Maduro insists today that these elections gave him a mandate to rule despite the National Assembly ruling them illegitimate and appointing Guaidó president.

“Rest assured that all the support you have given me I will return with love, with commitment,” Maduro told a small crowd of chavistas at an anniversary event. “I will never surrender to the American empire, I will always be ready to go forward and advance on the path of sovereignty and national dignity.”

Maduro has also called for nationwide elections to replace the current members of the National Assembly, the official federal lawmaking body that he had until this point refused to acknowledge as legitimate. In 2017, Maduro created the illegal “national constituent assembly” (ANC) to dissolve the legitimate legislature and rewrite the constitution, a task the Maduro lawmaking body has yet to begin. Since its creation, the ANC has largely focused on passing laws to ban political speech that opposes the Maduro regime under the guise of “hate speech.”

The National Assembly is the only democratically elected body in the country, as the 2015 elections were the last free and fair round of voting in the country. President Guaidó derives his legitimacy from being appointed by the Assembly, of which he was president when he was inaugurated.

“Let us make legitimate an institution that has not been legitimate in five years,” Maduro announced on Monday. “Let us have accelerated elections for the National Assembly to see who wins. Venezuela will sooner rather than later have a peace agreement with the Venezuelan opposition and they can return to the constitutional path.”

“On May 20, 2018, we proved that we do not participate in farces,” he wrote on Twitter. “The world is clear: the usurpation is destruction and we reject the robbery of popular sovereignty.”