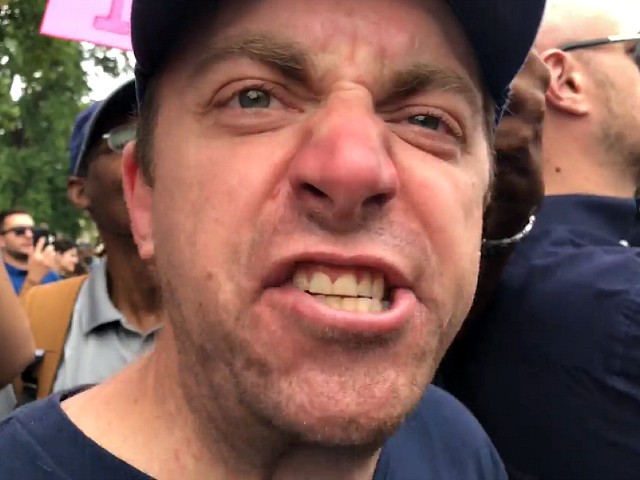 Breitbart News produced a video montage of assorted leftist agitators protesting in Washington, DC, against the nomination and subsequent confirmation of Justice Brett Kavanaugh to the Supreme Court.

In one clip, a man identifies a Breitbart News employee capturing video of his peers’ behavior, screaming and pointing, “That’s Breitbart!”

Another protester wearing a t-shirt with the message, “THIS IS WAR” yells, “We don’t have to be tolerant of intolerance!” He later derides a dissident conservative counter-demonstrator, “You are subhuman! We’re done being polite!” and chants, “Shame! Shame! Shame!”

A separate leftist is seen shouting a chant: “Reject the lies!”

One demonstrator screams about “this entire patriarchal, controlling bulls**t,” while wearing a t-shirt with the message: “WE STAND FOR LOVE.”

MoveOn.org — a left-wing and partisan Democratic agitation outfit funded by George Soros — called on its supporters last Thursday to engage in “direct actions” in the nation’s capital to block Kavanaugh’s confirmation.

An email by Robert Reich, composed on behalf of MoveOn.org, described the outfit’s political strategy as grounded in “direct actions in Washington, D.C., at Senate office buildings, including busing in constituents from key states.”

Sen. Susan Collins (R-MA) and her staffers received threats of violence — including death threats — in the days leading up to her vote to confirm Kavanaugh to the Supreme Court.

Maine Republican Chairwoman Demi Kouzounas [said] Collins and her staff had been physically threatened, sent vulgar messages, and had bizarre things sent to them in the mail.

“The vulgarity is unbelievable … things like ‘I hope you’re raped. I hope that you’re stuck with an unborn baby from a rapist,’ … I mean who says these things? And where is the respect?” she said.

Sen. Cory Gardner (R-CO) described on Sunday a threat sent to him following Kavanaugh’s confirmation. His wife reportedly received a graphic text message containing a video of a beheading.