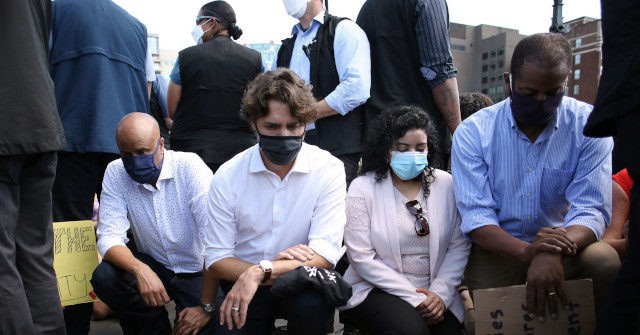 Canadian Prime Minister Justin Trudeau on Friday took a knee during an anti-racism protest on Parliament Hill in Ottawa but was still mocked by his fellow demonstrators.

Trudeau was initially mum about whether he would attend the event but showed up mid-afternoon in a black face mask while flanked by his security detail.

Several protesters shouted at the Canadian prime minister to “stand up to Trump.” Video shared to social media shows he did not immediately acknowledge the heckling.

PM @JustinTrudeau takes a knee at an anti-racism rally on Parliament Hill pic.twitter.com/8hezGWFZX1

Trudeau clapped and nodded in response to many of the things said by speakers at the front of the crowd, including one who said there is no middle ground on the issue.

“You are either a racist or an anti-racist,” the speaker said.

He gave a similar response when the crowd starting chanting: “Black lives matter.”

Back in the United States, five Democrat senators knelt during a moment of silence for George Floyd — a black man who recently died in police custody in Minneapolis — on Capitol Hill.

Ahead of the moment of silence, Sen. Cory Booker (D-NJ) gave a brief speech about Floyd’s life.

“Today we gather here in solemn reverence to not just mark his tragic death but to give honor to his life,” Booker said, reports  The Hill. “George Floyd, Ahmaud Arbery, Breonna Taylor. May we honor those dead by protecting all who are alive.”

Multiple demonstrations are planned in Washington, D.C., and throughout the U.S. this weekend as the movement against police brutality in the wake of Floyd’s death nears its third week.

A rally scheduled for D.C. on Saturday “may be one of the largest that we’ve had in the city,” Washington Metro Police Chief Peter Newsham said. “We have a lot of public, open-source information to suggest that.

“We expect that Saturday’s demonstration will, like I said, be more of the same peaceful demonstrators coming to exercise their First Amendment right in Washington.”

Tens of thousands of demonstrators are expected in the nation’s capital this weekend.

The Minnesota National Guard has been activated in preparation for a planned protest Friday after officials said they received credible threats of violence.

Similar rallies are scheduled in other major U.S. cities, including Kansas City, Los Angeles, New York City, Detroit, and in Maine, where President Trump will travel Friday to visit a medical production facility.