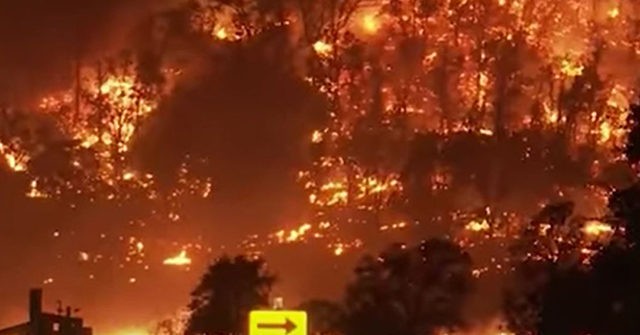 A California firefighter had just finished a 60-hour shift last week when his girlfriend told him a wildfire was threatening her parents’ home.

Elise Jones was eating dinner with her parents on September 27 at their house in Santa Rosa when they received orders to evacuate, according to WTAE.

“They looked outside and they could actually see the glow,” said Jones’ boyfriend, Grant Newnom, a firefighter with the San Jose Fire Department.

“The wildfire became part of the Glass Fire — a rapidly-moving blaze that has burned about 42,600 acres since Sunday and forced tens of thousands of people to evacuate in the wine country of Napa and Sonoma Counties,” the WTAE report stated.

The 34-year-old’s firefighting gear was still in his car, so he drove straight to their home which was a little over an hour away.

Once he arrived, Newnom joined other firefighters and got to work moving a woodpile, debris, and flammable materials away from the house. He also used a chainsaw to cut down trees that might pose a threat.

“You could see embers flying in the wind and all over the place,” his girlfriend told NBC News. “You’re just like, ‘yeah, those are flames.’ My mom was crying a lot. She was just very concerned for him.”

For several hours, the first responders worked to extinguish the fires near the home.

“And there were a couple of times during the burn that I’m like, wow, OK, we might lose this thing,” he explained.

When the house was finally deemed safe, the other firefighters left and Newnom put out the remaining flames with a garden hose.

“There are no words to express our gratefulness to Grant and the crew that saved our home. They are definitely heroes,” said Jones’ mother.