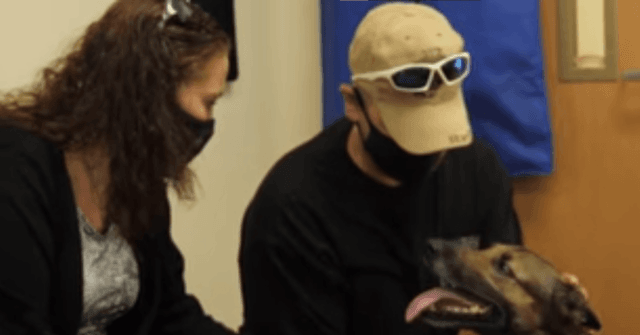 A German Shepherd that survived falling from a balcony is beginning life again as a service dog, according to officials in Volusia County, Florida.

However, when deputies arrived to speak with Murphy, she allegedly threw the dog over the railing, according to records from the Volusia County Sheriff’s Office.

The canine landed on her feet and people standing nearby picked her up. Rescuers later named the one-year-old pup Miracle.

Since that time, Miracle has lived with a foster family and she is a trained service animal. Volusia County Animal Services found another home for her with a military veteran in need of a special companion.

“Just like her name that day was truly a miracle that she did not sustain any further injuries,” Adam Leath, Director of Volusia County Animal Services, commented.

Following three months of recovery and training, Miracle went home Thursday with Ted and Bridget to settle into her role as a service dog for Ted.

“The dog is incredibly intelligent. She is eager to please, love, and have fun,” said Alicia Dease, Volusia County Animal Services Field Supervisor.

“She also is in need of a responsibility and a job and I feel certain that we’ve found that job for her,” Dease continued:

We can’t think of a more appropriate name for Miracle! After a harrowing experience, this story has a happy ending. Today, Miracle, a trained service dog, was introduced to her new, loving family, which includes a military veteran in need of a service dog. Every day, Volusia County Animal Services works to provide help and resources for our four-legged and two-legged companions alike.

Ted, a disabled veteran who served in Iraq and Afghanistan during his time in the Marine Corps, said he and Miracle hit it off the moment they met.

“If I get a little anxious, or a little upset or anything, she’s going to calm me down, I know it,” Ted stated.

Murphy was barred from owning animals for five years and required to cover expenses for Miracle’s care because she was taken by authorities, the Click Orlando report concluded.